A Lesson in True Power

Never has humankind been more powerful than it is today. We have the power to send men to the moon, we have the power to split the atom, and artificial intelligence is affecting our lives in all manner of ways. But it was British Prime Minister Stanley Baldwin who said in 1931 that power without responsibility is the mark of the harlot throughout the ages.

Have we become a generation of harlots? What do we do with the power that has been put into our hands? Do we use it for good or ill? Aren’t we rather like children set loose in the film, Willie Wonker’s chocolate factory, gorging on the sweets set before us, and then getting upset when we get stomach ache? And because of humankind’s misuse of power, we all stand in great danger of getting something far worse than an upset tummy. Then we all begin to make excuses for this state of affairs: “nothing to do with me, I am quite powerless”. Don’t believe it. We all have power and exercise power over others in countless ways. but we need to understand very clearly that what power means to a Christian is very different from what the world means. And if you want to know about Christian power, then you need look no further than Jesus, whose divine power is always put at the service of love, and a love that goes far beyond what the world likes to call love.

Throughout the Gospels, others seek to lure Jesus into misusing his power: in the wilderness, the devil tempts him, “go on, you can do it”. On his cross, he is goaded:” if you are who you say you are, come down from the cross”. Paradoxically, Jesus shows his true power, and the true nature of Christian power, by refusing to go along with those who have power games of their own to play. Jesus shows his power in acts of love and service, and invites us to do likewise. 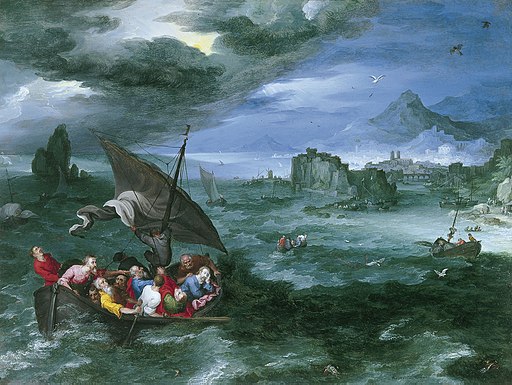 In the Gospel: Jesus is in a boat on the lake with his friends: suddenly it all begins to go wrong. One of those sudden gales blows up, and they all risk perishing. “Save us Lord, we are drowning” they cry. So Jesus gives them a practical lesson about power. We all like to be in control, but the disciples were out of control, they had, as people say today, “lost it”. To rely on their own power to get out of this mess would have been futile, so Jesus demonstrates that power comes from God, and that he, God in man, is able to exercise that self same power for the good of all. He rebukes the wind and the waves, and all becomes calm once more. “Who is this?” they ask. He is the one who calls them to abandon false delusions of power, false notions of their ability to control events, and to come back to faith, faith in God, faith in the one he has sent. Power comes from God, and that same power which stilled the raging of the sea, has the capacity to bring calm and order into our disordered lives.

And we who bear his name are called to use the power that God shares with us to the same ends: to bring peace where there is conflict, to bring justice to the oppressed, to co-operate in the ongoing work of making the creation a faithful reflection of the very splendour of God himself. God never misuses the power that is his by right, and he expects that the power he has shared with us should be given back to him in loving service.

In our hearts we know this to be true, yet we still seek to use power the earthly way. How foolish we are!

2. Sunday after Trinity Luke 9;51-62 “Not Fit for Service” is an English phrase meaning, useless... END_OF_DOCUMENT_TOKEN_TO_BE_REPLACED

Trinity Sunday John 16;12-15 “The Forgotten Trinity” is a British Council of Churches report in 1989... END_OF_DOCUMENT_TOKEN_TO_BE_REPLACED

Pentecost Sunday John 20;19-23 The picture presented in the description of the first Pentecost in The... END_OF_DOCUMENT_TOKEN_TO_BE_REPLACED

Ascensiontide John 17;20-26 I dreamt last night that I was in heaven, and do you know,... END_OF_DOCUMENT_TOKEN_TO_BE_REPLACED

Sixth Sunday of Easter John 14;23-29 This Reflection is based on a book entitled Encountering Evil... END_OF_DOCUMENT_TOKEN_TO_BE_REPLACED

Fifth Sunday of Easter John 13;31-35 We have followed the events of the Passion, the Cross... END_OF_DOCUMENT_TOKEN_TO_BE_REPLACED

Fourth Sunday of Easter John 10;22-30 How often when we ask a question have we already... END_OF_DOCUMENT_TOKEN_TO_BE_REPLACED