A Meditation for Mid Lent

Over the west entrance of London’s Westminster Abbey is England’s tribute to the 20th century saint of the Russian Orthodox Church. St Elizabeth Federovna, the one time grand princess who married the Uncle of Tsar Nicholas II and whose younger sister Alexandra was the wife of the Tsar. Both Elizabeth and Alexandra were elegant and beautiful women, both witnessed the murder of their husbands, and both were canonised by the Russian Church. 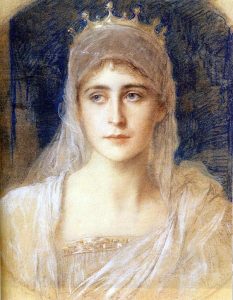 The widow Elizabeth sold all her possessions and modelled her life as a nun and began the Mary and Martha community of active sisters very much like those that existed in England. In 1913 Elizabeth although a grand duchess came to England to visit her cousin King George V wearing the grey habit of a nun. She returned to her community in Moscow and worked throughout the Revolution and first world war among the poorest and most brutalised Christians in Russia. In May 1918 Mother Elizabeth and five sisters were arrested and flung into a mineshaft to be drowned. Like many other courageous Christians facing death, they sung Psalms from the liturgy, “Kyrie eleison Lord save thy people”. Grenades were flung into the mine but the singing continued for a long period. The bodies of Mother Elizabeth and Sister Barbara were recovered and after some time taken to the Orthodox Church of St Mary Magdalene on the Mount of Olives.

These and many other lives of holy courage and dedication have been an inspiration beyond their own countries and Elizabeth Federovna is remembered not only at Westminster Abbey but in the small church of St Silas Pentonville in London because they show us all the meaning of deepest faith in God and that his Church cannot live or survive with lukewarm or mediocre disciples.

Third Sunday of Easter Luke 24,36-48 Witnesses play a critical role in every Trial before a... END_OF_DOCUMENT_TOKEN_TO_BE_REPLACED

Divine Mercy Sunday John 20,19-31 Preaching in England about the joy of Christ’s resurrection was never... END_OF_DOCUMENT_TOKEN_TO_BE_REPLACED

The Psalmist in his prophecy about Easter Day (Ps 118:24) says: «This is the day the... END_OF_DOCUMENT_TOKEN_TO_BE_REPLACED

Fifth Sunday in Lent John 12,20-33 We have reached the days before Easter with its serious... END_OF_DOCUMENT_TOKEN_TO_BE_REPLACED

Fourth Sunday in Lent John 3,14-21 People, myself included, have wondered how St John, writing about... END_OF_DOCUMENT_TOKEN_TO_BE_REPLACED

Third Sunday in Lent John 2,13-25 “We don’t do things like that round here. You’ve only... END_OF_DOCUMENT_TOKEN_TO_BE_REPLACED

Second Sunday in Lent Mark 1,14-15 To the surprise of the BBC managers, a popular TV... END_OF_DOCUMENT_TOKEN_TO_BE_REPLACED