Eat, Drink and Be Merry? 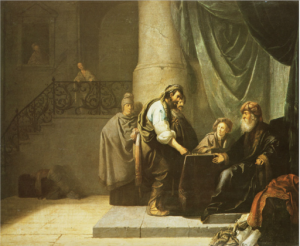 Willem de Poorter, The Parable of the Talents or Minas (Public domain)

The parable of the Talents teaches us how to make the Kingdom grow. It speaks of the gifts we receive from God. Everyone has something to give, and we learn from one another. The key to understanding this parable is our view of God. Among the Jews who followed the Pharisees, some imagined that God was a severe Judge, who treated people according to the merit they gained from keeping the Law. So people feared God and stopped growing. This especially prevented people from opening their hearts to receive the new experience of God which Jesus communicated.

We are told that the first two servants doubled their money. But the third buried his talent so not to lose it. It is a question of the goods of the Kingdom, which are given to people according to their need. Everyone receives some goods of the Kingdom, but not all respond in the same way. The worst response from any of us, is to do nothing.

So the story tells us that the Master returns from a long journey, and the first two servants render their accounts. They doubled their talents, and the Master is well pleased. “Well done good and trustworthy servant, you have shown you are trust worthy in small things. I will trust you in greater; come and join in your Master’s happiness” (Matt 25,21).

Third Sunday after Epiphany Luke 4,14-21 Jesus returns to Nazareth, his home town, as was his... END_OF_DOCUMENT_TOKEN_TO_BE_REPLACED

Second Sunday after Epiphany John 2,1-11 Signs and signposts are essential for finding our way about.... END_OF_DOCUMENT_TOKEN_TO_BE_REPLACED

The Epiphany of the Lord Matt 2,1–12 Is it true, this fantastic story of wise men... END_OF_DOCUMENT_TOKEN_TO_BE_REPLACED

The Nativity of the Lord Luke 2,15–20 Early in September the British public were hearing that... END_OF_DOCUMENT_TOKEN_TO_BE_REPLACED

Fourth Sunday of Advent Luke 1,39–45 This reflection entitled “Mary’s Troubles” was inspired by an Advent... END_OF_DOCUMENT_TOKEN_TO_BE_REPLACED

Third Sunday of Advent Luke 3,7-18 The stark message of John the Baptist is “Repentance for... END_OF_DOCUMENT_TOKEN_TO_BE_REPLACED

Second Sunday of Advent Luke 3;1-6 Imagine that you’ve just had a message from God. He... END_OF_DOCUMENT_TOKEN_TO_BE_REPLACED