And is it true?

“And is it true?” That is what the poet John Betjeman asks in a poem simply entitled “Christmas”, and that, as you might say, is the sixty-four thousand dollar question. Obviously most people don’t think it is true, otherwise, rather than simply eat, drink and spend too much, in what sometimes seems like a desperate flight from reality, they would join us at Mass over Christmas… Mark you, in a way you can understand why they do it, can’t you, and in its own way, Midnight Mass in a lovely old church beautifully decorated for the feast can also be an escape from reality, can’t it? Traditional hymns, a traditional crib, a traditional choir and a traditional priest, a beautiful setting where the candlelight gives an aura of magic. You can half close your eyes and imagine you are being transported way back in time, maybe to your own childhood and Happy Christmases of long ago, maybe to a bygone age when, so the dream goes, our honest, simple ancestors worshipped at crib and altar, and then returned to their straightforward, uncomplicated lives. Yes, when we contemplate what we have done with our lives, it’s hardly surprising if we do want to snatch an hour or two of escapism before life resumes. 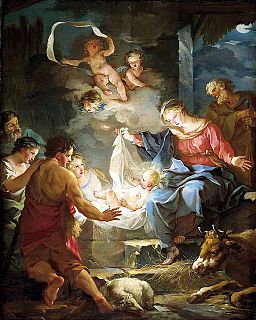 But if you think about the Christmas Gospel story, you will soon realise that there’s not much escapism there. There is high drama – all births are that, though the circumstances of this birth are especially compelling – but there are also things which we prefer to shut out from our minds, like the nasty smells there must have been in the stable from all the animals, and there are shepherds and angels. It is a strange mixture of earth and heaven – the mess of the stable and the glory of God.

It is almost like the story of your life and mine, for we all carry within us earthly desires and heavenly longings, we all say not simply “And is it true?”, but “Please God, let it be true”, though sometimes in little more than a whisper, which we hope no one else will hear, for fear they will think we are religious extremists. So often we hang back, we are trapped between heaven and earth, and we rue our lot.

We can feel safe with Jesus the Baby of Bethlehem, because like that he is, in the words of a much loved Carol, indeed little, meek and helpless. We can worship the Babe in the Manger and then go our way. But Jesus as man is something quite different – his teachings are a hard pill to swallow, he wants not merely a say, he wants the say in our lives. Jesus the man says that God’s way and the way of the world simply do not mix – the world takes, God gives, the world says “me first”, God says “Me and others first”, the world says “It’s easy to be a Christian,” or, maybe “Don’t bother me with all this God-stuff now, there’s plenty of time for that when I’m old”, Jesus says “Time is short – follow me now”.

The world says “I can’t stand all those Bible bashers and religious lunatics.” Jesus says “I am the way” and millions of people through the ages have found the key to what life is really all about by abandoning the blind alleys they have got themselves in to, and following in his way, and in so doing, they have found a treasure beyond price, and one that is freely available to all. Some of them the world may indeed call lunatics, but others prove by their lives that they have both feet firmly on the ground, but their eyes fixed heavenwards, and all that is required to set you on the way to joining them is a simple yes to Jesus – a yes which will give you the key to what life really is all about.

Third Sunday after Epiphany Luke 4,14-21 Jesus returns to Nazareth, his home town, as was his... END_OF_DOCUMENT_TOKEN_TO_BE_REPLACED

Second Sunday after Epiphany John 2,1-11 Signs and signposts are essential for finding our way about.... END_OF_DOCUMENT_TOKEN_TO_BE_REPLACED

The Epiphany of the Lord Matt 2,1–12 Is it true, this fantastic story of wise men... END_OF_DOCUMENT_TOKEN_TO_BE_REPLACED

The Nativity of the Lord Luke 2,15–20 Early in September the British public were hearing that... END_OF_DOCUMENT_TOKEN_TO_BE_REPLACED

Fourth Sunday of Advent Luke 1,39–45 This reflection entitled “Mary’s Troubles” was inspired by an Advent... END_OF_DOCUMENT_TOKEN_TO_BE_REPLACED

Third Sunday of Advent Luke 3,7-18 The stark message of John the Baptist is “Repentance for... END_OF_DOCUMENT_TOKEN_TO_BE_REPLACED

Second Sunday of Advent Luke 3;1-6 Imagine that you’ve just had a message from God. He... END_OF_DOCUMENT_TOKEN_TO_BE_REPLACED