Partaking in the Divine

And there shall be one fold and one shepherd

When I was a child, on a Summer Sunday evening, my parents would take me for a walk along the seafront at Hastings in East Sussex. It was just like a miniature Speakers’ Corner. There was the Catholic Truth Society, there was the Protestant Truth Society, there were various other people seeking to persuade us that they were right and everybody else was wrong. If you were to go along the seafront at Hastings on a Sunday evening in summer now, you would not see the soapboxes out, you would rather, I suspect, go in fear of your life from the drunks and the drug addicts.

Nowadays most people seem to live in an age of moral and spiritual indifferentism – I can do what I like provided it feels right, provided it doesn’t hurt anyone else, or at least not too much, so if I choose to get drunk out of my mind, what is it to do with you? I can believe what I like, because, as we all know, there are many paths to God, and it’s common sense that one way is as good as another – we’ll only know who was right and who was wrong when we get to heaven, as I heard someone say recently, which rather begs a lot of questions, I would have thought. I rather like the rejoinder someone made when he was told that all truth is relative – “But is that statement relative as well?” 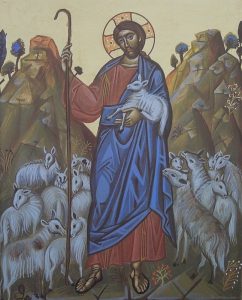 The Good Shepherd (By Ted, Flickr.com)

All Christians must long for and pray for the day when all those who claim the name of Christian will indeed be gathered into one fold with the one shepherd, Jesus Christ the Lord, but as the church too is swept along on a tide of relativism, far from Christian Unity coming closer, it seems ever more remote.

It was the former Bishop of London, Graham Leonard, who observed that the real divide in the Christian Church is between those who think it is a revealed religion and those who think they are free to change things as they go along. By revealed religion, he means as someone else put it “God spoke once, and the word was Jesus.” There is abroad in the church today far too much of the attitude that says in effect “I” – or “we” – “know better than Jesus”. Jesus was wrong, he was misguided, when he did this, when he taught that, and so on, he was a creature of his time, the implication being that he also had all the shortcomings and prejudices of the time, which I would have thought, simple creature that I am, rather undermined the age old belief in His divinity.

That is the tragedy of so many churches in the Western World today. Much as we all want Christian unity, much as we must detest bickering between Christians, much as we must seek to be menders of fences, I am ever reminded of the prophet Jeremiah. Jeremiah suffered cruelly at the hands of his contemporaries for telling them truth that they did not wish to hear, and he had this to say – you will find it in the eighth chapter of Jeremiah, and it repays careful study, thought and prayer – “From the least to the greatest, all are greedy for gain; prophets and priests alike, all practise deceit. They dress the wound of my people as though it were not serious. “Peace, peace” they say when there is no peace.”

Our lives must be an earnest seeking after the truth that Christ alone reveals, and a dedication to living that truth: the Church that conforms to the spirit of the age will always be weak: the one that stands up for the truth of Christ will reap her reward. Only in truth can we find the unity we long for in the one fold with the one shepherd.

Third Sunday after Epiphany Luke 4,14-21 Jesus returns to Nazareth, his home town, as was his... END_OF_DOCUMENT_TOKEN_TO_BE_REPLACED

Second Sunday after Epiphany John 2,1-11 Signs and signposts are essential for finding our way about.... END_OF_DOCUMENT_TOKEN_TO_BE_REPLACED

The Epiphany of the Lord Matt 2,1–12 Is it true, this fantastic story of wise men... END_OF_DOCUMENT_TOKEN_TO_BE_REPLACED

The Nativity of the Lord Luke 2,15–20 Early in September the British public were hearing that... END_OF_DOCUMENT_TOKEN_TO_BE_REPLACED

Fourth Sunday of Advent Luke 1,39–45 This reflection entitled “Mary’s Troubles” was inspired by an Advent... END_OF_DOCUMENT_TOKEN_TO_BE_REPLACED

Third Sunday of Advent Luke 3,7-18 The stark message of John the Baptist is “Repentance for... END_OF_DOCUMENT_TOKEN_TO_BE_REPLACED

Second Sunday of Advent Luke 3;1-6 Imagine that you’ve just had a message from God. He... END_OF_DOCUMENT_TOKEN_TO_BE_REPLACED