The Compassionate Christ
– If You Are a King

The writer Rod Dreher begins his book The Benedict Option with these words: “No one saw the flood coming.” This theme matches the gospel passage of St. Matthew that opens the new liturgical year on Advent Sunday recalling Noah and the need for preparedness. Noah was a man who lived by faith in God and was well prepared to face natural or man-made disaster, unlike the people of Dreher’s home town, Baton Rouge, who never imagined the consequences of the August 2022 floods. The whole community was shell shocked very much like the people of Europe are today, also facing the perfect storm of food and fuel shortages, inflation and economic confusion, political turmoil and social conflict. For decades people have been asleep believing everything they have been told, that such things could never happen again in our enlightened world, that lessons had really been learned. 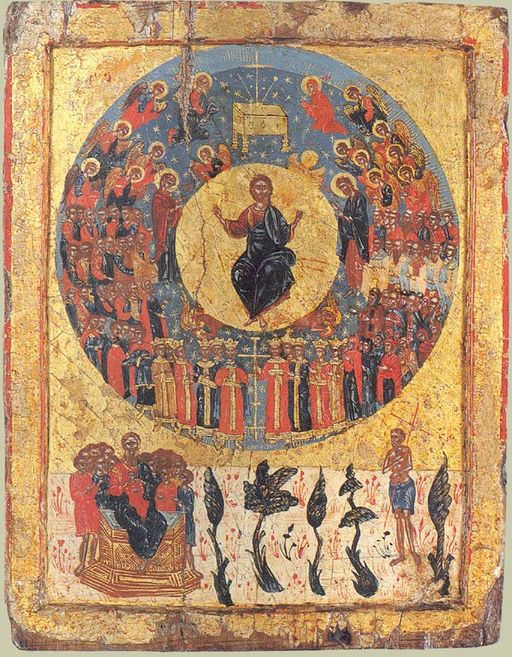 The Christian world has likewise indulged in a similar lack of preparedness, not listening to the warnings that have been given by the likes of Pope Benedict XVI and others, who decades ago, saw the storm clouds gathering over the Church, with ingredients that would create a spiritual crisis. Christians have been asleep like the foolish virgins who said, ‘Lord, Lord, open to us!’ But he answered and said, ‘Assuredly, I say to you, I do not know you.’[Matt. 25;11] There is no assurance in the illusion that today’s creeping secularism could be trusted and tolerated, that somehow Christians could live alongside or even modify their faith to a godless culture. Rarely have Christians been less prepared to work together to face the storms and supporting each other in the face of destruction. We approach Advent 2022 with this monumental challenge, that Jesus, in his coming and taking our humanity, by his birth in Bethlehem and by his death as a man in Jerusalem, he makes possible our participation in his divinity, enabling us to face the storms. This is the only message we take into our own lives as alert and sensitive worshippers in the coming months. It is the same message of St. Paul to the Roman Church, “Put on Christ” and do this, knowing the time, that now it is high time to awake out of sleep.” [Romans 13;11]

Banish the idea that Advent is just “a countdown season” before the Christmas parties and return to the crucial point of a serious Advent season and with the mind of Matthew’s Gospel, ready to resist inertia. “Know this, if the master of the house had known what hour the thief would come, he would have watched and not allowed his house to be broken into” says Jesus. [Matt 24;43] The setting in which Jesus spoke these words was perfect! It was Jerusalem on the first day of his Holy Week Passion and the teaching he gave of vigilance was crucial if his followers, who must be in a state of readiness. John Henry Newman, preaching to his parishioners on this predicament, said, that those who watch for Christ “in all that happens, would never be surprised or overwhelmed”.

Never has it been more vital for Christians not to be so preoccupied with daily living that they are indistinguishable from everyone else, being taken by surprise by a terrible turn of events unable to fight the good fight in readiness for the Son of Man’s coming at an hour we do not expect.

The Feast of the Baptism of the Lord John 1;29-34 Psalm 42 speaks of a soul... END_OF_DOCUMENT_TOKEN_TO_BE_REPLACED

Solemnity of the Epiphany of the Lord John 1;1-14 Epiphany is one liturgical drama. It begins... END_OF_DOCUMENT_TOKEN_TO_BE_REPLACED

The Holy name of Jesus Luke 2;15-21 One of the great moments for a parent is... END_OF_DOCUMENT_TOKEN_TO_BE_REPLACED

Solemnity of the Nativity of the Lord John 1;1-14 Writing a homily for Christmas is made... END_OF_DOCUMENT_TOKEN_TO_BE_REPLACED

The Fourth Sunday of Advent Matt 1;18-25 I had a shock during the week. No, it... END_OF_DOCUMENT_TOKEN_TO_BE_REPLACED

The Third Sunday of Advent Matt 11;2-11 Two figures prepare us for the coming of Jesus... END_OF_DOCUMENT_TOKEN_TO_BE_REPLACED

The Second Sunday of Advent Matt 3;1-12 “Prepare the way for the Lord” cried John the... END_OF_DOCUMENT_TOKEN_TO_BE_REPLACED

Advent Sunday Matt 24;37-44 The writer Rod Dreher begins his book The Benedict Option with these... END_OF_DOCUMENT_TOKEN_TO_BE_REPLACED

Sunday before Advent, Christ the King Luke 23;33-43 In six months, Britain will witness the coronation... END_OF_DOCUMENT_TOKEN_TO_BE_REPLACED

2nd Sunday before Advent Remembrance Sunday Luke 21;5-19 One of the saddest things about growing old... END_OF_DOCUMENT_TOKEN_TO_BE_REPLACED

3rd. Sunday before Advent Luke 20;27-38 The Reflections using Luke’s gospel will end with the final... END_OF_DOCUMENT_TOKEN_TO_BE_REPLACED

All Saints Tide Would you like to be a saint? The whole idea of sainthood arouses... END_OF_DOCUMENT_TOKEN_TO_BE_REPLACED

The 18th Sunday of Trinity Luke 18;1-8 Jesus told the disciples a parable about the need... END_OF_DOCUMENT_TOKEN_TO_BE_REPLACED

The 17th Sunday of Trinity Luke 17;11-19 Christians should think regularly about the word “mercy”. It... END_OF_DOCUMENT_TOKEN_TO_BE_REPLACED