TAKE UP YOUR CROSS

People today seldom talk about “being possessed”. But they often say, “I don’t know what came over me” – which means that they really do believe in “possession”. When we regret something we’ve said or done, we try to blame it on some another agency, (natural or supernatural) rather than on ourselves, and this often occurs because we haven’t given enough thought before we say or do it.

Today’s reading tells us about two different people who were brought to Jesus by others, who asked Him, on their behalf, to heal them: the deaf-mute and the woman’s ‘possessed’ daughter – who sounds like an adolescent becoming a grown-up physically whilst still being a child emotionally.

Such ‘possessed’ teenagers are indeed possessed by the ‘Spirit of Uncertainty’, which itself makes them more difficult to communicate with. They ‘shut themselves up’ from us – often literally in their bedrooms – and nothing we try to do for them, makes much difference.

Jesus dealt with these two cases quite differently. He took the deaf-mute aside from other people, and used physical procedures like spittle, and putting His fingers in their ears.

But it wasn’t the girl, but her mother, whom Jesus challenged; and she taking up that challenge, which brought about the healing of her daughter. Jesus, it seems, never met the girl. All of which suggests that healing, of body, mind and spirit, requires a multi-disciplined approach. We should stop thinking of it being solely the business of doctors, nurses, psychiatrists and social workers. 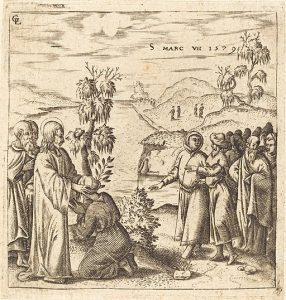 Friends, spiritual directors, parents, relations, and intercessors have a critical part to play in restoring people’s health. The word Ephatha means “Open up!” So it suggests that we need to be open-minded when it comes to dealing with deaf people, especially the wilfully deaf.

When we pray for others, either in Church or in private, it makes no difference to the power of such prayers in God’s sight if we don’t know who these ‘others’ are. If we petition God for them, it’s our faith that counts – that such prayers are always answered by God, even if His answer is not what we had been hoping for. Jesus didn’t just heal. He saw healing as an opportunity to challenge (or test) the faith of those involved. Before he healed the girl, he invited her mother to give Him one good reason why He should do what she asked– though she wasn’t one of the Chosen Race. Her answer, says St. Mark, so impressed Him that He discerned that faith in Him that He looks for in each one of us – but so often fails to find!

Fifth Sunday of Easter John 13;31-35 We have followed the events of the Passion, the Cross... END_OF_DOCUMENT_TOKEN_TO_BE_REPLACED

Fourth Sunday of Easter John 10;22-30 How often when we ask a question have we already... END_OF_DOCUMENT_TOKEN_TO_BE_REPLACED

Eastertide Luke 20;1-18 In my student days many seminarians were helped by the work of London’s... END_OF_DOCUMENT_TOKEN_TO_BE_REPLACED

Palm Sunday Luke 22;14-56 Let us reflect on Jesus speaking of himself as “the bread of... END_OF_DOCUMENT_TOKEN_TO_BE_REPLACED

Fifth Sunday of Lent John 12;1-8 Jesus travelled with twelve disciples, but also had a considerable... END_OF_DOCUMENT_TOKEN_TO_BE_REPLACED