We never forget you have a choice. That is a popular, at the time, advertising slogan from a few years back. Did it work? Did it produce a healthy balance sheet? Apparently not, because the irony is that that particular company has long since disappeared – clearly too many people chose some other airline, for it was the long vanished British Caledonian. We never forget you have a choice.

Jesus never forgot that people had a choice – of course he was deeply pained by those who heard his message but then preferred to go their own way, but he did not water down his message to make it more readily acceptable, and that is a lesson that preachers have to learn, and re-learn over the years.

Today’s Gospel is a case in point. Jesus had been saying hard things to his disciples, and things that, humanly speaking, made no sense, all about being the bread of life: how could this young teacher say that he was bread, let alone the bread of life? It simply did not add up. Of course, with the benefit of two thousand years of Christian history, we should be able say beyond doubt that we know that Jesus feeds us on himself in the Blessed Sacrament, that this is not some mere commemoration of a dead hero, but an encounter with the Lord of life; indeed more than an encounter, for in the Eucharist Jesus shares his very life with us, to enable us to become more like him, and to continue his ministry in the world. 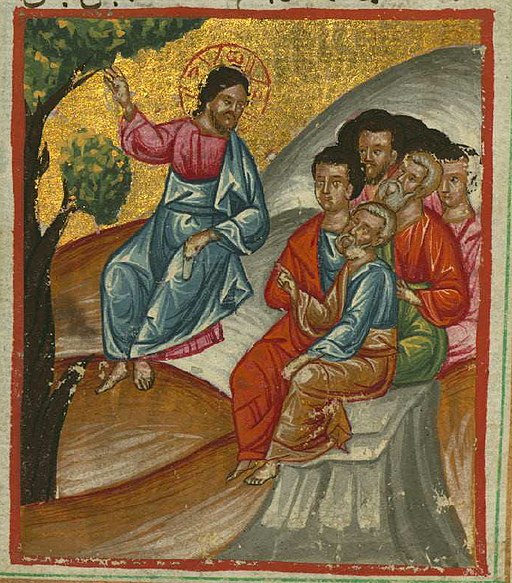 Jesus teaching his disciples – From a 1684 Arabic manuscript of the Gospels, copied in Egypt by Ilyas Basim Khuri Bazzi Rahib, CC BY-SA 3.0.

At the time, his hearers could have known none of this, and it is hardly surprising that some turned away. But Jesus did not dilute the message. He didn’t say “Perhaps I can make this a bit simpler” or “If this is hard, forget that I even said it.” No, Jesus proclaimed himself to be the heavenly food that his followers could not do without in their earthly pilgrimage. Obviously, we cannot know what his tone of voice was when he asked the twelve “Do you also wish to go away?” Was it aggressive? I think not – we see nothing of that in Our Lord. Challenging? Certainly. The twelve had to make their choice, and we know that they did, even if they did not fully understand. Sad? Yes, I think so, but the best things that life can offer are not always easy.

Materially speaking, we in the western world have never had so much choice in how we live our lives, and how we spend our money, but spiritually most of our contemporaries, by choosing not to follow Jesus, or else by choosing to water his teaching down to conform with their own prejudices or the spirit of the age are rejecting Jesus as though they had made a downright denial. We never forget you have a choice. I never forget that those who attend church week in and week out have a choice, and they choose to come because they know that the Lord summons them to dine at his table. In a sense we have to make that choice every day, for we can so easily fall back into the at best semi-Christian ways of the world. Yes, this most important of all choices is an ongoing task. We are called to choose: choose the way of Jesus, even if the world chooses otherwise, and continue to hold fast to Jesus’ teaching as it has come down to us, for as Peter rightly says, “to whom else can we go? You have the words of eternal life.”

Third Sunday after Epiphany Luke 4,14-21 Jesus returns to Nazareth, his home town, as was his... END_OF_DOCUMENT_TOKEN_TO_BE_REPLACED

Second Sunday after Epiphany John 2,1-11 Signs and signposts are essential for finding our way about.... END_OF_DOCUMENT_TOKEN_TO_BE_REPLACED

The Epiphany of the Lord Matt 2,1–12 Is it true, this fantastic story of wise men... END_OF_DOCUMENT_TOKEN_TO_BE_REPLACED

The Nativity of the Lord Luke 2,15–20 Early in September the British public were hearing that... END_OF_DOCUMENT_TOKEN_TO_BE_REPLACED

Fourth Sunday of Advent Luke 1,39–45 This reflection entitled “Mary’s Troubles” was inspired by an Advent... END_OF_DOCUMENT_TOKEN_TO_BE_REPLACED

Third Sunday of Advent Luke 3,7-18 The stark message of John the Baptist is “Repentance for... END_OF_DOCUMENT_TOKEN_TO_BE_REPLACED

Second Sunday of Advent Luke 3;1-6 Imagine that you’ve just had a message from God. He... END_OF_DOCUMENT_TOKEN_TO_BE_REPLACED