A Meditation for Mid Lent

Earlier this year I met a friend I had not seen for some time. He reminded me of our first meeting around Easter time. It was in America and I had seen a sign outside a Church building which proclaimed: “Christ has died, Christ has risen…”. So this became the subject of our first discussion. The resurrection we proclaim is far more than an historical event from the past; it is an opening of a way out of the culture of death. We proclaim that Christ is risen and his triumph continues in the lives of those who follow him. This proclamation of the resurrection is at the heart of the Christian faith without which St. Paul readily admits, there is no faith and it is all in vain.

In the middle of the present pandemic some people may come to realise that Western cultures have been turning away from dealing with death and mortality. Christians have lived for some considerable time in the shadow of humanist philosophers such as Marx, Nietzsche, Sartre and Camus who speak about the death of God, with the result that cultures that have had little time for God, little time for thoughts about our own death, simply carry on by putting humanity in God’s place. The results have been appalling! The horrors of the cultures of death abound in our recent histories when the cruelty inflicted on people has been unimaginable.

As a trainee priest, in post World War II, I was aware of and deeply affected by the horrors of Humanist totalitarian cultures that had turned Eastern and Western Europe upside down sacrificing millions of innocent people in the name of progress. Particularly behind the “Iron Curtain” Christians were living in micro cultures of kindness, humanity and love. 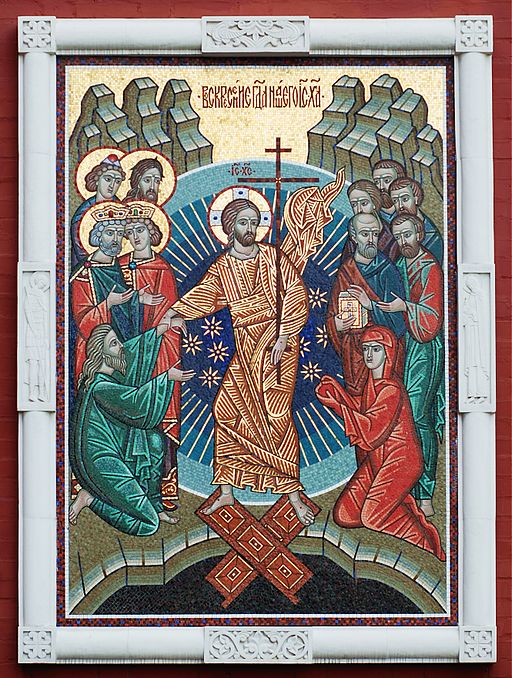 As a student I was deeply influenced by the many testimonies that came to us from the work of Keston College concerning the lives of so many who had survived or whose lives were changed by seeing the power of the risen Christ. In the labour camps they were living the Easter Faith that Christ is Risen. Of course the story of Alexander Solzhenitsyn is possibly the most known but there are countless others too. Bishops, priests, nuns, laymen and women are who all endured and survived singing their Easter faith. I will never forget the account of a violent man serving a 15 year sentence for terrible crimes, whom one might easily have judged as a hopeless case. But the sheer purity and love and witness of some Christian inmates deeply influenced and turned this criminal life around. Not philosophy or logic but by witnessing the Easter faith – Christ is risen! – gave this criminal a chance. Vasily Ivanovitch Koslov’s transformation is not a fairy story for his conversion to Christian faith resulted in a further 25 years extension to his trials in the labour camp!

The Gulags of the Soviet Union were instances of the culture of death which many survived and this witness still continues today in other camps and prisons around the world. These martyrs proclaim that God has raised Jesus Christ from death. From St. Stephen onwards, the Easter faith has been a real presence in countless lives of faithful people who saw hope beyond the culture of death. Allelujah, Allelujah, Allelujah.

2. Sunday after Trinity Luke 9;51-62 “Not Fit for Service” is an English phrase meaning, useless... END_OF_DOCUMENT_TOKEN_TO_BE_REPLACED

Trinity Sunday John 16;12-15 “The Forgotten Trinity” is a British Council of Churches report in 1989... END_OF_DOCUMENT_TOKEN_TO_BE_REPLACED

Pentecost Sunday John 20;19-23 The picture presented in the description of the first Pentecost in The... END_OF_DOCUMENT_TOKEN_TO_BE_REPLACED

Ascensiontide John 17;20-26 I dreamt last night that I was in heaven, and do you know,... END_OF_DOCUMENT_TOKEN_TO_BE_REPLACED

Sixth Sunday of Easter John 14;23-29 This Reflection is based on a book entitled Encountering Evil... END_OF_DOCUMENT_TOKEN_TO_BE_REPLACED

Fifth Sunday of Easter John 13;31-35 We have followed the events of the Passion, the Cross... END_OF_DOCUMENT_TOKEN_TO_BE_REPLACED

Fourth Sunday of Easter John 10;22-30 How often when we ask a question have we already... END_OF_DOCUMENT_TOKEN_TO_BE_REPLACED