Eat, Drink and Be Merry?

The story of the wise and the foolish virgins that Jesus tells in today’s Gospel, looked at objectively, is a strange bitter-sweet mixture. What could be nicer than a wedding, we ask ourselves, particularly if we don’t have to pay for it, or do any of the running around. It is not mere coincidence that weddings crop up in the Gospels – at the human level, this is because they are signs, sacraments, of the fullness and the joy of human life that Jesus comes to bring, and are celebrations of the human love which reflects God’s love affair with his creation, and supremely with the men and women he has made in his own image. But more than that, they are reminders of the covenant relationship between God and his people. Weddings in New Testament times and indeed right down to our own time in Israel are very different from what we are now familiar with.

However chaotic wedding preparations may be in our experience, they don’t touch the customs of the Jews, with the bridegroom turning up whenever he felt like it, as part of a game really, to see if he could catch the bridal party out. He had to send a messenger in front of him to shout out “The bridegroom is coming”, but they still had to be ready at all times, just in case. What must it have been like for the bride as she waited, joyfully, but impatiently for the arrival of the groom? If he arrived after dark, torches would have to have been carried by those going out to meet him. On his arrival, the celebrations began, and latecomers were not allowed in. 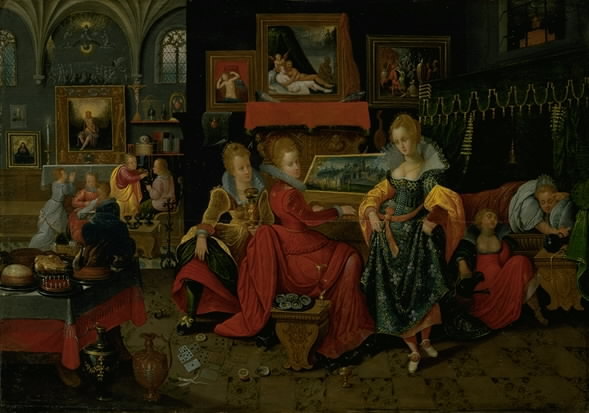 So, at that level, a homely story, recounting a scene familiar to Jesus’ hearers, but now, as is His wont, is added the heavenly message – watch because you do not know the day or the hour. And the warning is about, yes, heaven and hell. The church from early days has seen this parable as a warning about judgment and the coming of the Kingdom. The Lord will return, those who are ready will enter into the joy of the Kingdom, the marriage feast of the Lamb, those who are unprepared will be left in the darkness, bemoaning the fact that the party is going on without them.

The important point to note is that those left outside are left there because of their own failures, and not because of the bridegroom – there is plenty of room at his table for all, but some will, through their own laziness, be excluded. That is what judgment is about. It’s not an angry God telling people that they are predestined to go to hell, so to hell let them go. It is about people who, by the choices they make or fail to make, here and now, are saying that they don’t want the seat that has been reserved for them with their name on it at the high table in the Kingdom, and that seat will be left vacant, to the pain of those around.

So, what are we to do, to ensure that, when the bridegroom comes, we are ready and waiting for him? We must look inside ourselves and, under God, see where we are falling short in our Christian life. An old hymn talks about living this day as if our last – if you knew of a certainty that within the next twenty-four hours your soul would be required of you, to use an old fashioned phrase, how would you spend that time? Of course, in all probability, that won’t happen, so the sense of urgency goes, but that is wrong. The English writer, G K Chesterton, commented that Christianity has not been tried and found wanting – it has been found difficult and not tried. We must not let the spirit of the age take us over and say, no God, no heaven no hell, vanity of vanity, all is vanity, so eat, drink and be merry, for tomorrow we die. We are called to higher things.

2. Sunday after Trinity Luke 9;51-62 “Not Fit for Service” is an English phrase meaning, useless... END_OF_DOCUMENT_TOKEN_TO_BE_REPLACED

Trinity Sunday John 16;12-15 “The Forgotten Trinity” is a British Council of Churches report in 1989... END_OF_DOCUMENT_TOKEN_TO_BE_REPLACED

Pentecost Sunday John 20;19-23 The picture presented in the description of the first Pentecost in The... END_OF_DOCUMENT_TOKEN_TO_BE_REPLACED

Ascensiontide John 17;20-26 I dreamt last night that I was in heaven, and do you know,... END_OF_DOCUMENT_TOKEN_TO_BE_REPLACED

Sixth Sunday of Easter John 14;23-29 This Reflection is based on a book entitled Encountering Evil... END_OF_DOCUMENT_TOKEN_TO_BE_REPLACED

Fifth Sunday of Easter John 13;31-35 We have followed the events of the Passion, the Cross... END_OF_DOCUMENT_TOKEN_TO_BE_REPLACED

Fourth Sunday of Easter John 10;22-30 How often when we ask a question have we already... END_OF_DOCUMENT_TOKEN_TO_BE_REPLACED