A Man in a Hurry

In January, our reflections examined God’s ‘Warfare Strategy’ against the Dark Powers of Evil, and we found the Epiphany was like ‘unwrapping’ God’s Christmas Gift of His Incarnate Son to the world. That Strategy needed at first to be kept Secret–to be revealed only bit-by-bit, and only to those who, like Mary had first willingly given their personal answer, Amen-Yes, to God’s invitation to become His fellow-worker in putting His Plan into practice. Next we see the wide range of God’s choice of other fellow-workers: men and women; a carpenter; some fishermen; a tax collector; young and elderly; locals, and others from far away.

Then, compare their Amen-Yes of the first disciples with that of people today, when told that God not only created them, but has also created a unique and critical part for them to learn and take part in His Redemption Drama.

People today often say, “I’m sure God would never choose me to do His work – I’m not skilled, or learned, or clever, or holy enough” or worse still, by playing what they mistakenly imagine is their ’Trump Card’: “I’m just too ordinary for that.” In God’s sight there are no ‘ordinary’ people. We are all uniquely designed by God, and of inestimable value to Him in “working his purpose out”. Anyway, God isn’t looking for ordinary people, but extra-ordinary ones, who will say their Amen-Yes to His call, just as Mary and her colleagues did. Any idea that we are ‘just ordinary’ is a big fat self-deception; it’s also an insult to our Creator! If God took all that trouble to form us in our mother’s womb, and even more trouble to ‘manifest’ Himself to us, through His Son, our Saviour and Redeemer, who are we to think ourselves as ‘ordinary’? Our everyday speech and attitudes prove we don’t think anything of the sort; and worse still, we imagine God approves of such false-humility! 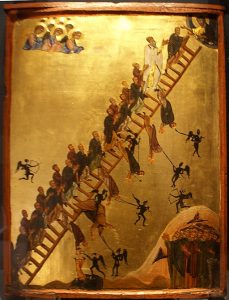 Let us remember that God seldom expects us to work single-handed for Him. Once we say Amen to His Call, we soon discover that He has called others to work alongside us on His Strategy. That is the biggest problem many followers of Christ have always faced. Finding that God expects us to work alongside others, some of whom we’d never have chosen ourselves, given half the chance!

Lent is a good time to overcome our preference for worshipping and working only with people we know and like, and thereby ceasing to be ‘Soldiers of Christ’ fighting a common enemy. Christians can too easily become, without realising it, a “Comfortable Club” for those who enjoy meeting together on Sunday mornings. As soldiers of Christ battles are never won that way! The Church of Christ isn’t ‘ours’ anyway – it belongs to, and was created by, God, not with the intention of becoming a comfortable club.

God needs his Church-on-Earth to be like a mixture between a Hospital, a School, and a Regiment, where we meet Him, together with other ‘Amen-Persons’, of His choice not ours, and to be made whole or ‘Holy’ and in which to learn, with God’s help, how to un-wrap His Hidden-but-Open Gift-Secrets and make them our own. But most importantly to learn how to re-wrap these God given gifts in a way that will make those we share them with, and go on to want to un-wrap their own gifts for themselves and to discover what really is inside all that wrapping!

Third Sunday after Epiphany Luke 4,14-21 Jesus returns to Nazareth, his home town, as was his... END_OF_DOCUMENT_TOKEN_TO_BE_REPLACED

Second Sunday after Epiphany John 2,1-11 Signs and signposts are essential for finding our way about.... END_OF_DOCUMENT_TOKEN_TO_BE_REPLACED

The Epiphany of the Lord Matt 2,1–12 Is it true, this fantastic story of wise men... END_OF_DOCUMENT_TOKEN_TO_BE_REPLACED

The Nativity of the Lord Luke 2,15–20 Early in September the British public were hearing that... END_OF_DOCUMENT_TOKEN_TO_BE_REPLACED

Fourth Sunday of Advent Luke 1,39–45 This reflection entitled “Mary’s Troubles” was inspired by an Advent... END_OF_DOCUMENT_TOKEN_TO_BE_REPLACED

Third Sunday of Advent Luke 3,7-18 The stark message of John the Baptist is “Repentance for... END_OF_DOCUMENT_TOKEN_TO_BE_REPLACED

Second Sunday of Advent Luke 3;1-6 Imagine that you’ve just had a message from God. He... END_OF_DOCUMENT_TOKEN_TO_BE_REPLACED