“It’s not fair!” How often one has heard that complaint from children of all ages? Matthew tells us that the discontented labourers in the vineyard complained because the Owner paid all of them the same amount, regardless of whether they had worked one or ten hours. 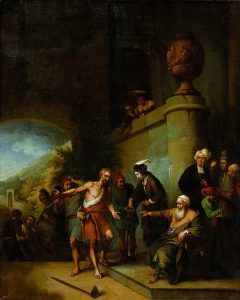 No doubt their case today would be taken up by the National Union of Vineyard Workers, and their grievance negotiated with their Employer: and whatever the verdict, some at least of them would still complain of being treated “unfairly”. Often the best way to see how we’ve ‘got something wrong’ – whether it’s about ‘fairness’, money, our golf-swing, [or our ideas about God] – is to look at our mistakes, in ‘slow motion’.

This is what the Parable describes if we look at it one step at a time:

If Jesus had meant that parable to be a lecture on ‘How to Make Your Vineyard Pay’ his listeners would have had good reason to grumble. But that was not His intention!

He used this parable (like many other ones) to describe the Kingdom of God – and explain, whether they liked it or not, there is (literally) a world of difference between God’s idea for His Kingdom, and our idea of what we think God’s idea ought to be.

About God’s Kingdom, Jesus said things like “The first shall be last, and the last first” and “How hard it is for the rich to enter the Kingdom” and “Let him who would be first among you be servant of all” and demonstrated it at the Last Supper despite Peter’s protests by washing the Apostles feet.

If we want to become part of God’s Kingdom, we must prepare ourselves for a number of surprises, many of which will, at first sight not be to our liking.
For example, the way we think about ‘fairness’ and ‘justice, compared with the way God sees and administers them in His Kingdom – may require nothing less than a complete transformation of how we think! If that being true distresses us, it can only mean one thing: we have chosen to worship the wrong god, and to believe in the wrong faith; so, like those grumbling vineyard workers, and plaintive children, we shall find ourselves spending Eternity in a state of permanent discontent!

14th Sunday of Ordinary Time / Trinity 5. Mark 6,1-13 The season of Pentecost is a... END_OF_DOCUMENT_TOKEN_TO_BE_REPLACED

Video Conference in preparation for the Mainz Conference II (February 2022). Invitations with call-in and program details will be available later.