Partaking in the Divine

“He ascended into Heaven”

Sixth Sunday of Easter – “My Words are Spirit and Life”

An Englishman’s word is his bond. That’s a noble sentiment. But, there are words, and there are words. I detect a widespread cynicism about politicians, certainly at national level, because the perception is that their deeds don’t match up to their words. To make matters worse, words can mean different things to different people, and words certainly can change their meaning over time. You may know the saying that England and America are two nations divided by the same language. We are now no longer allowed to talk about mankind, but rather about humankind, which to my ear is ugly, even if it saves us from the error of, apparently, excluding half the human race. You can still get caught out, though.

Some years ago I found myself in an Old People’s Home talking to an old lady; she pointed to the lady next to her and said “We’ve got aids”. I did a double take, and was then somewhat relieved to see that she meant that they were both wearing hearing aids.

Now you may be asking yourself what all this has got to do with today’s Gospel. Because Churches often seem to love sheer wordiness (“They think that by their many words they will be heard” (Matthew 6.7)), we can become deaf to the one word that matters, which is Jesus the Word of God. Jesus the Word speaks words to us, words of challenge, words of love, words of reassurance, words of life, and we who bear His name are expected to hear and respond. 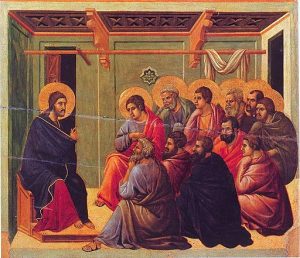 Let us take just this word, “commandment“, out of the Gospel as Jesus “Keep my commandments”. People think even The Ten Commandments are a bit old hat now. Besides Jesus got rid of all that, and simply asked us to love one another. If only it were that simple. We human beings do like to wriggle out of our obligations. The anguished complaint of the child when he has been asked to do something “Do I have to?” is the authentic voice of humanity. It’s all right if what we’ve been asked to do fits in with our own wishes and our own convenience, but if not, then all too often we will begin to find reasons for not doing as we have been asked, and then try to make a virtue out of our willfulness by saying we are asserting our independence or something similar. But Jesus lays it firmly on the line to His disciples “this is my commandment” – it is a commandment that He is giving them. We often get nearer to the truth of Jesus’ words by asking ourselves what He didn’t say. So here, for example, He didn’t say “I know you’ve got a lot on your minds, I know there are differences of personality among you, but I would be grateful if you could do your best to be nice to each other”. He didn’t say that or anything like that, but believe me, lots of Christians seem to think that’s what He said, and they act accordingly. No, Jesus said “This is my commandment”, and if we in any sense accept that He has something of value to say, let alone if we accept Him as Lord and God, we must heed His words, we must not try to water them down, and we must believe that He meant what He said, even if as a consequence we’ve got to change the way we live.

But the point is, Jesus tells His disciples that if they will accept the challenge to lead this (His) kind of life, then they will not merely deserve to be His friends, they really will be, and what greater privilege could there be than that?  But even here there is a warning, for if we apply again our little test of asking here not so much what Jesus did not say, but what He left unsaid, we will realise that to fail to lead lives of Jesus-like love means that we have said that we do not want to be His friends, because we are denying the Holy Spirit access to our lives to enable the love of Jesus to burn brightly there.

So here is the challenge: commandment. No one can force you and me to follow His commandment, but whenever you and I are tempted to the opposite, to disobedience, to hatred, or almost as bad, willful indifference, to turning away from Jesus, then let us just reflect, let us take to heart that measureless love which showed itself on Calvary, let us ask ourselves whether we are truly prepared to take Jesus’ commandment as just that, let us reflect whether we truly want to be Jesus’ friends or His enemies, and surely to such questions there can only be one response. I mentioned at the start the cynicism about politicians who appear not to keep their word. Can the same criticism be leveled at us as Christians, that we do not keep the word, the word of Jesus our Lord?

2. Sunday after Trinity Luke 9;51-62 “Not Fit for Service” is an English phrase meaning, useless... END_OF_DOCUMENT_TOKEN_TO_BE_REPLACED

Trinity Sunday John 16;12-15 “The Forgotten Trinity” is a British Council of Churches report in 1989... END_OF_DOCUMENT_TOKEN_TO_BE_REPLACED

Pentecost Sunday John 20;19-23 The picture presented in the description of the first Pentecost in The... END_OF_DOCUMENT_TOKEN_TO_BE_REPLACED

Ascensiontide John 17;20-26 I dreamt last night that I was in heaven, and do you know,... END_OF_DOCUMENT_TOKEN_TO_BE_REPLACED

Sixth Sunday of Easter John 14;23-29 This Reflection is based on a book entitled Encountering Evil... END_OF_DOCUMENT_TOKEN_TO_BE_REPLACED

Fifth Sunday of Easter John 13;31-35 We have followed the events of the Passion, the Cross... END_OF_DOCUMENT_TOKEN_TO_BE_REPLACED

Fourth Sunday of Easter John 10;22-30 How often when we ask a question have we already... END_OF_DOCUMENT_TOKEN_TO_BE_REPLACED