The Widow’s Coins – Not What They Seemed

Solemnity of Christ the King

Living in the End Times

Some said the world was going to end at midnight on 31 December 1999. Well, we’re still here, it did not happen!!

Of course, when you consider the mess the world is in, it’s tempting to say that the end of all things is really at hand. Yes, there is a general malaise, which cries out for a solution, yet, in the eyes of the world seemingly there is none to be had. More of the same, harder, seems to be the only answer that is offered. It’s nothing new. In the time of Our Lord there was also undoubtedly a great deal of restlessness in the hearts of the Jews, coupled with all sorts of expectations of God intervening to sort matters out. This is the situation that Our Lord addresses in Our Gospel reflection. “but in those days, after that tribulation, the sun will be darkened, and the moon will not give its light; the stars of heaven will fall, and the powers in the heavens will be shaken. Then they will see the Son of Man coming in the clouds with great power and glory”. [Mark 13;24-27] What, is Jesus saying? What is the mood? Something is going to happen, isn’t it? A mood, of expectation, but what kind of expectation? 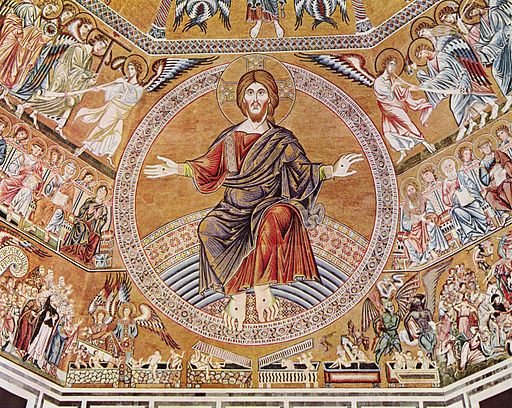 Is it like the expectation of the man who knows he is going to be executed in the morning, or the mood of the man who knows he has won the lottery, and is just waiting for cheque in the post to arrive? Well, the clue lies in the imagery that Our Lord uses: think of the words: the sun and the moon darkened, the stars fall from heaven. The word for this is apocalyptic: something earth-shaking is upon us. And what is this? Nothing less than the return of the Son of Man, something that we repeat faithfully in the Creed, “I look for the resurrection of the dead, and the life of the world to come”, but which somehow lacks immediacy when some two thousand years have passed, and the end of time has not yet arrived.

These words portend both threat and promise: if the earth shakes, and the sky falls in, then surely we shall all be swallowed up? Clearly, that will be the fate of some, an unpalatable thought in today’s world, where all expect to win prizes. But that is not quite the end of the story, is it? For the Lord promises his disciples that when this happens, when the whole created order is dissolving into chaos, his angels, his messengers, will come to gather the elect, his chosen ones to him. Peace and love for his chosen ones, as it were, in the eye of the storm.

How then are we to live? First, and above all we need to accept the reality of God’s love for us, and for our world, and that he will never leave us or forsake us. Then we have to have the grace to grow in his love, to build our relationship with him. That means time: in the busyness of life, where is the time for God? Is it a few snatched moments, or is it, as they say, prime time, quality time. We know what the answer ought to be, but what is the reality? And the more time we spend with God, the more we will know his love for us, the more we will know the need of his love, the securer we will feel in the face of the uncertainties of life. Time is God’s gift to us, to use in his service, to understand better the height and the depth of his love. While we have time, let us do good unto all men and women, but above all, let us use it to know Christ more clearly, to love him more dearly, and to follow him more nearly day by day.

Fifth Sunday of Easter John 13;31-35 We have followed the events of the Passion, the Cross... END_OF_DOCUMENT_TOKEN_TO_BE_REPLACED

Fourth Sunday of Easter John 10;22-30 How often when we ask a question have we already... END_OF_DOCUMENT_TOKEN_TO_BE_REPLACED

Eastertide Luke 20;1-18 In my student days many seminarians were helped by the work of London’s... END_OF_DOCUMENT_TOKEN_TO_BE_REPLACED

Palm Sunday Luke 22;14-56 Let us reflect on Jesus speaking of himself as “the bread of... END_OF_DOCUMENT_TOKEN_TO_BE_REPLACED

Fifth Sunday of Lent John 12;1-8 Jesus travelled with twelve disciples, but also had a considerable... END_OF_DOCUMENT_TOKEN_TO_BE_REPLACED