Invitation Letter from the NCC UK

England welcomes an experienced priest into the team

Newsletter on the ordinations in England on Saturday 3rd September

Administration of the Nordic Catholic Church in the UK

This newsletter is designed to clarify, after a long period of silence, the current status of the Nordic Catholic Church in the United Kingdom – a silence made necessary by the utmost discretion required for the preparation and planning involved.

On Saturday 3rd September, Bishop Roald Flemestad formally received the first 5 priests into the Nordic Catholic Church in a Service of Incardination. The form of this Service included Conditional Ordination, but in such a manner as to be both appropriate within, and approved by, the Union of Scranton.

This specially constructed Rite took place in the presence of the Prime Bishop of the Union of Scranton, The Most Reverend Anthony Mikovsky. Three Anglican priests were conditionally ordained; and two, from other denominations, were ordained absolutely. 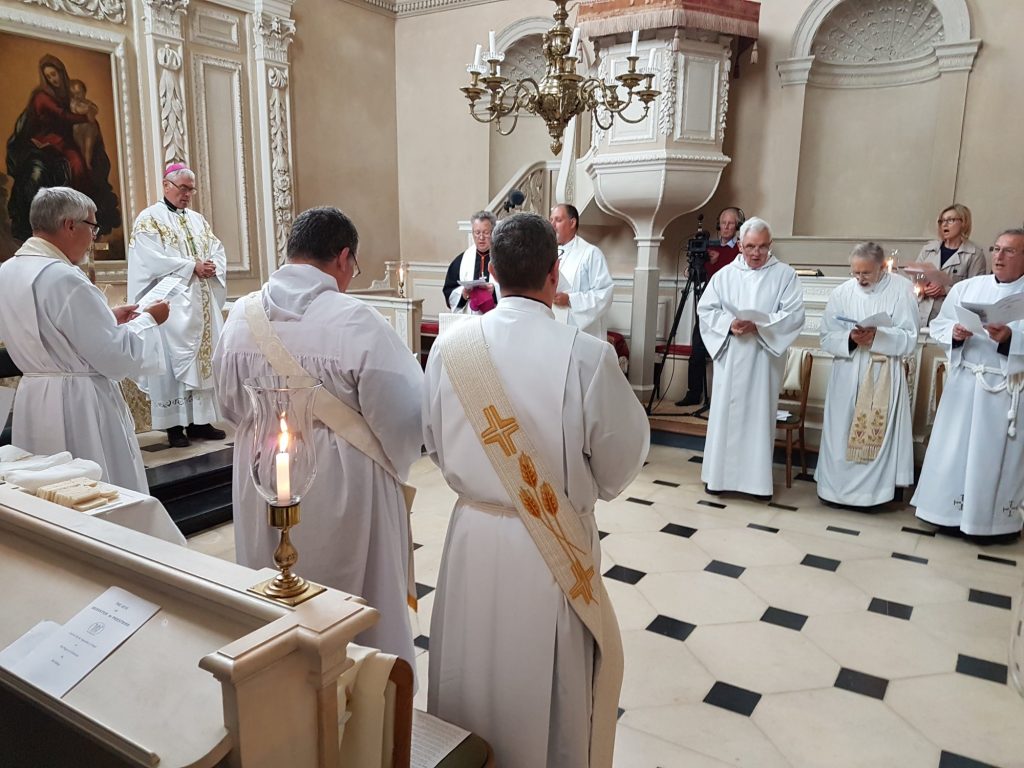 The liturgy took place in the beautiful Chapel of Grimsthorpe Castle in Lincolnshire with the gracious consent of Lady Willoughby d’Eresby, and in the presence of invited guests.
It was necessary to get this way of proceeding agreed by all the parties and individuals concerned, before proceeding, for several important reasons:

Firstly, because the Holy Orders of the Nordic Catholic Church had been recognised by the Vatican in late December 2015, and the Bishops of Union of Scranton were determined, for the sake of the ecumenical future, not to confuse this new clarification of their existing historic orders and status in Europe.

Secondly, the bishops needed to be aware of the state of separated churches of Europe, as well as those in North and South America. There are numerous Continuing Anglicans, as well as Continuing Roman Catholics, to name just a few, who are already searching for a sound Non-Papal Catholic future. The step that was taken in England needed to be a secure (and catholic-based) model for those coming forward to consider organic union.

Thirdly, the Bishops of the Union of Scranton [PNCC and NCC], were also aware of their responsibility to the Holy Orthodox Churches who had met in June 2016 in Crete, and with whom they already had agreements. This statement (of their agreements) may be found in the document “ROAD TO UNITY” – which has been ratified by the parties involved, as a foundational doctrinal document within the Union of Scranton.

Fourthly, this Conditional Ordination guaranteed the recognition of the Orders of those who, though once fully in Communion with Old Catholics (including the Polish National Catholic Church), had subsequently been obliged to live in an impaired or unsatisfactory relationship with them; and who wished to remove all dispute under which they had been obliged to exercise their ministry for the past three decades.

The past six months have been devoted to preparing the Liturgy, as well as the first candidates for this development. We hope this explanation will enable our friends to understand the caution and silence entailed whilst all this was taking place.

Meanwhile we have begun to build this new platform. The five new priests are for the time being a part of the Nordic Church’s Mission, but intend foster a non-Papal Catholic Church in the UK as it is has already developed in Scandinavia, Germany, France and Italy. This new UK platform will provide sacraments, teaching and doctrine that are completely reliable and a ministry of which groups can be absolutely confident. These priests will be followed by others serving under Bishop Roald Nikolai Flemestad’s oversight and supported by their colleagues in Europe and America.

The impact of this historic breakthrough has already become evident. With the presence of Prime Bishop Anthony and firm backing of his Bishops, fresh encouragement has been given to the clergy of the Nordic Catholic Church on the Continent to respond to our duty of restoring the unity of separated churches in the true faith and Christian love.

We have agreed and also begun the response to the Great and Holy Council of Crete’s call in June 2016 for a union of Churches. In the UK especially, we have been authorised to continue to discover a way of implementing an agreement with the Traditional Anglican Church of Britain. The TACB bishop Ian Gray, who was present on September 3rd with other Continuing Anglican leaders, has invited NCC representatives to his international Synod in October where our own Bishop Roald will present new proposals.

To enable this work to continue we now have a bank account [admin@nordiccatholic-uk.com] whose manager is Andrew Heald. In each country the bishop appoints a Vicar General. For England Fr Geoffrey Neal was appointed by the Bishop for this role to represent and liaise with him concerning the UK administration.

In July seven pilgrims from England travelled to Norway to join the pilgrimage organised by the Nordic Catholic Church to the Shrine of St Olav. This was another chance to meet people and clergy from other countries, and to experience the culture of their small missions.

THE ORATORY OF THE WAY AND MIND OF THE SPIRIT has been running for about two years and because it is foundational, should continue to play an important part working alongside the Nordic Mission. It was conceived as a journey for lay people, seeking to provide a way which preserves the received faith as expressed by the Holy Scriptures, the Church Fathers of the first millennium and the Anglican Divines. Over the past years several small groups have begun to meet and study together. Now is the time to return to this project, having established the mission platform.

Although the Oratories are designed to be ecumenical cells, they are also the basic model for any group who think of themselves as ‘Faithful Remnant’ Christians. In the NCC itself this model seems to be developing with a priest working in a secular job or retired, who gathers around himself one or two small cells which in many cases may also have a deacon and readers. Whether we speak of ecumenical oratories or Nordic Missions, all of us who meet together for prayer and study will comprise ‘Cells’. The latter will be small, flexible, and inexpensive with a common rule of life, meeting regularly to achieve an orthodox future that grows from the ancient faith. The concept is one that many people we speak to desire to see, yet find it difficult to get started. This is where our work now lies.

We are still inviting priests, pastors and people to work with us to form themselves into Oratories. The Nordic Catholic Mission does not seek to proselytize or ‘poach’ from other Christian bodies. The Nordic Church relations with others will be important in this time of discernment and uncertainty.

We shall place ourselves alongside Christians who not only share the same goals of orthodoxy in doctrine and morality, but in this present age the urgently-needed evangelical spirit of Christ’s Church as it seeks a renewal of the apostolic mission.

Click here for pdf-version of the newsletter:
Contender No. 7 Autumn-2016

Third Sunday of Easter Luke 24,36-48 Witnesses play a critical role in every Trial before a... END_OF_DOCUMENT_TOKEN_TO_BE_REPLACED

Divine Mercy Sunday John 20,19-31 Preaching in England about the joy of Christ’s resurrection was never... END_OF_DOCUMENT_TOKEN_TO_BE_REPLACED

The Psalmist in his prophecy about Easter Day (Ps 118:24) says: «This is the day the... END_OF_DOCUMENT_TOKEN_TO_BE_REPLACED

Fifth Sunday in Lent John 12,20-33 We have reached the days before Easter with its serious... END_OF_DOCUMENT_TOKEN_TO_BE_REPLACED

Fourth Sunday in Lent John 3,14-21 People, myself included, have wondered how St John, writing about... END_OF_DOCUMENT_TOKEN_TO_BE_REPLACED

Third Sunday in Lent John 2,13-25 “We don’t do things like that round here. You’ve only... END_OF_DOCUMENT_TOKEN_TO_BE_REPLACED

Second Sunday in Lent Mark 1,14-15 To the surprise of the BBC managers, a popular TV... END_OF_DOCUMENT_TOKEN_TO_BE_REPLACED