This reflection is based on a well-known Latin Collect originally found in the Sacramentary of St Gregory and in the English form used at this time each year from the English 1662 Book of Common Prayer – which says:

Prevent us, O Lord, in all our doings with thy most gracious favour, and further us with thy continual help, that in all our works begun, continued, and ended in thee, we may glorify thy holy Name, and finally, by thy mercy, obtain everlasting life; through Jesus Christ our Lord. Amen.

Those words ‘prevent’ and ‘further’ puzzle many people. ‘Prevent’ sounds like asking God to stop us doing anything – even right things; and ‘Further’ is used in notices saying, “Go no Further!” But in English ‘prevent’ also has its older meaning ‘to go ahead of, guide, or protect’; whilst ‘to further’ (as a verb) means to enable a plan, (or someone’s career) to move forwards – by a grant of money for example.

In this Prayer, the words Prevent and Further should be understood in that original sense. They ask God to ‘lead the way’ – by giving us ideas which, if we follow them through, will advance both His Kingdom in His World, and His Plan for our perfection, which He devised for each of us before we were born –and bring it to fruition. For Christians today the problem is not a lack of good ideas. Young people especially love a challenge; and find the idea of working alongside the God whom they worship a very attractive one. They want their Faith to have a ‘practical dimension’ – beyond attending church and listening to others telling them what to believe and do. 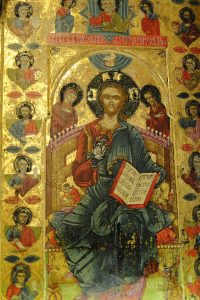 Not all worldly values are bad ones. Some have real value, and children should learn that things like Truth, Sincerity, Compassion and the gift of Faith, all have a real value. Good Values (which we call “Virtues”) are God’s priceless jewels which we, as His Servants, must learn to safeguard; but if we choose to worship His jewels (rather than God Himself) we commit idolatry.

Today, God’s jewels of “right celestial worth,” are being mindlessly traded by mankind for more fragile, and often unattainable virtues –for example, Fame, Security, Success, Happiness, Satisfaction and Independence– these values are as fickle and unstable as the fashion, taste and prejudice on which they are based. Tragically people today are easily persuaded to embrace these worldly values. And when they fail to satisfy them, they turn to other values to see if they are more gratifying, rather than to God – for guidance.

Those two words in the ancient collect, ‘prevent’ and ‘further’, remind us that God has His Plan for our future which may differ significantly from the Plan we have formulated for ourselves –and we should treasure that Plan as if it belongs exclusively to ourselves, and nobody else – not even to God! Therefore, in the Collect, by contrast, we ask God that His Plan – that ‘in all our works begun, continued, and ended in thee, we may glorify thy holy Name, and finally, by thy mercy, obtain everlasting life’.

This could hardly be more different from today’s popular belief which views those self gratifying values, Fame, Security, Success, Happiness, Satisfaction and Independence as its chief objectives! So it’s hardly surprising that many people today choose to look elsewhere, rather than to the Godly virtues, only then to discover that they are still deeply dissatisfied with where their own Plan has led them!

The Feast of the Baptism of the Lord John 1;29-34 Psalm 42 speaks of a soul... END_OF_DOCUMENT_TOKEN_TO_BE_REPLACED

Solemnity of the Epiphany of the Lord John 1;1-14 Epiphany is one liturgical drama. It begins... END_OF_DOCUMENT_TOKEN_TO_BE_REPLACED

The Holy name of Jesus Luke 2;15-21 One of the great moments for a parent is... END_OF_DOCUMENT_TOKEN_TO_BE_REPLACED

Solemnity of the Nativity of the Lord John 1;1-14 Writing a homily for Christmas is made... END_OF_DOCUMENT_TOKEN_TO_BE_REPLACED

The Fourth Sunday of Advent Matt 1;18-25 I had a shock during the week. No, it... END_OF_DOCUMENT_TOKEN_TO_BE_REPLACED

The Third Sunday of Advent Matt 11;2-11 Two figures prepare us for the coming of Jesus... END_OF_DOCUMENT_TOKEN_TO_BE_REPLACED

The Second Sunday of Advent Matt 3;1-12 “Prepare the way for the Lord” cried John the... END_OF_DOCUMENT_TOKEN_TO_BE_REPLACED

Advent Sunday Matt 24;37-44 The writer Rod Dreher begins his book The Benedict Option with these... END_OF_DOCUMENT_TOKEN_TO_BE_REPLACED

Sunday before Advent, Christ the King Luke 23;33-43 In six months, Britain will witness the coronation... END_OF_DOCUMENT_TOKEN_TO_BE_REPLACED

2nd Sunday before Advent Remembrance Sunday Luke 21;5-19 One of the saddest things about growing old... END_OF_DOCUMENT_TOKEN_TO_BE_REPLACED

3rd. Sunday before Advent Luke 20;27-38 The Reflections using Luke’s gospel will end with the final... END_OF_DOCUMENT_TOKEN_TO_BE_REPLACED

All Saints Tide Would you like to be a saint? The whole idea of sainthood arouses... END_OF_DOCUMENT_TOKEN_TO_BE_REPLACED

The 18th Sunday of Trinity Luke 18;1-8 Jesus told the disciples a parable about the need... END_OF_DOCUMENT_TOKEN_TO_BE_REPLACED

The 17th Sunday of Trinity Luke 17;11-19 Christians should think regularly about the word “mercy”. It... END_OF_DOCUMENT_TOKEN_TO_BE_REPLACED