A Lesson in True Power

The Kingdom of Caesar

The two words “Signs” and “Wonders” often occur together, but mean rather different things. A Sign directs people towards what they are looking for: maybe an historic building, or a panoramic view. It exists to guide people away from itself, but towards the real Wonder.

‘Wonder’ describes our feeling when suddenly confronted by a panorama of mountains, lakes and majestic buildings – which words like ‘awesome’ or ‘breath-taking’ fail to describe adequately.

The two miracles in today’s Gospel were both Signs and Wonders. We should behold every miracle with Wonder – because that’s what ‘miracle’ means. But we should equally use our minds and imaginations to learn what Lessons Jesus intended us, like their first beholders, to draw from them.

Lesson One: Whenever Jesus detected the slightest vestige of Faith in His power to heal and save, on the part of those who came, or brought others for Him to ‘make whole’, a Miracle became more likely to be the outcome. Sometimes “He could do no miracle because of their unbelief”. He flatly refused to oblige those Scribes and Pharisees who ‘asked Him for a Sign or Wonder’ in order to gratify their curiosity. But it was just as often the faith of those who brought sick people to Him, rather than the faith of the victim which made the critical difference. 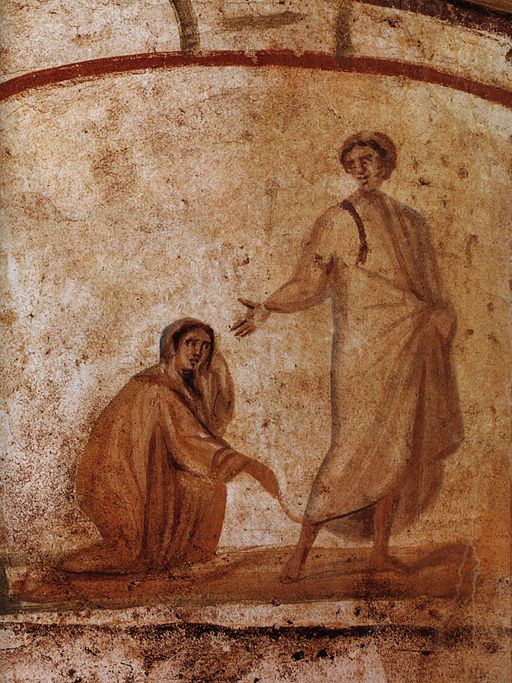 The healing of a bleeding woman, Rome, Catacombs of Marcellinus and Peter. [Unknown author, Public domain][

We know that the woman had such Faith. “If I can only touch his clothing, I shall be healed”, she said to herself. Jairus, when he learnt that his daughter was dead was told by Jesus to “have faith, not fear”.

Lesson Two: Sign posts, as we have seen, have only a single job to do. They are put there to point away from themselves and towards their desired object. But Wonders demand a great deal more of us than Signposts. Like signposts, they rightly demand our immediate attention. But unlike a signpost which points away from itself, a Wonder just goes on demanding our attention.

Such is the power of Wonder that we return to that panorama time and time again. We take others to see it. We’d like to explore the city, meet its citizens, and enter its buildings, to learn about its history. Does that sound remarkably like Evangelism? Well, it ought to – because that’s what it is!

As Christians, we have been allowed a glimpse of Eternity and the City of God in all its Wonder. However most of us are still at the ‘Panorama/Wonder’ stage, though we have followed all the signposts dutifully. So how about taking our pilgrimage a stage further? That will, of course, mean leaving our much-loved Panorama Point which it has taken us a lifetime to reach, and going on a long downhill journey which can be just as demanding as uphill – or even more so!

But of this we can be sure: that the Panorama will not be lost by leaving it. New Visions of our Destination, much clearer ones, will continually open up before our eyes the closer we get to it!

Fifth Sunday of Easter John 13;31-35 We have followed the events of the Passion, the Cross... END_OF_DOCUMENT_TOKEN_TO_BE_REPLACED

Fourth Sunday of Easter John 10;22-30 How often when we ask a question have we already... END_OF_DOCUMENT_TOKEN_TO_BE_REPLACED

Eastertide Luke 20;1-18 In my student days many seminarians were helped by the work of London’s... END_OF_DOCUMENT_TOKEN_TO_BE_REPLACED

Palm Sunday Luke 22;14-56 Let us reflect on Jesus speaking of himself as “the bread of... END_OF_DOCUMENT_TOKEN_TO_BE_REPLACED

Fifth Sunday of Lent John 12;1-8 Jesus travelled with twelve disciples, but also had a considerable... END_OF_DOCUMENT_TOKEN_TO_BE_REPLACED