Sometimes words are not enough

“We don’t do things like that round here. You’ve only been here five minutes, and you’re trying to turn everything upside down. Who do you think you are?”

That, seems a fair summary of the way the Jews in the Gospel responded to Jesus. We may kid ourselves that He is gentle Jesus meek and mild, but that’s not the way his contemporaries saw Him. Otherwise He wouldn’t have finished up on a cross on Good Friday, would He? As one commentator put it, killed by organised religion, and that’s a serious point for us all: does our organised religion crucify Jesus all over again? 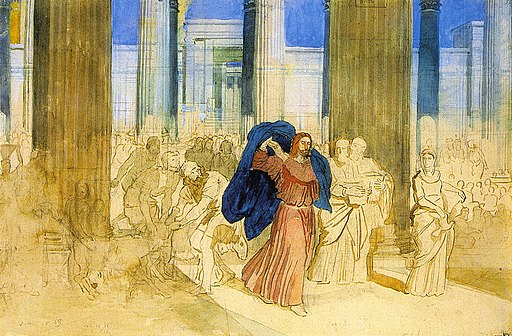 Jesus the outsider certainly challenged all the accepted religious conventions of his own day. The Gospel shows Jesus, the revolutionary young teacher up from the country coming to the Temple, the holiest place in the world for Jews, and throwing down the boldest challenge to what we would call the official religious establishment. In the Temple, daily sacrifices of animals were made to appease and please God. Though it may seem bizarre and in some ways repellent to us, for the Jews, this was the way to placate God. The problem was that certain people had turned the whole thing into a circus, the holy Temple of God had become just like a market place, with all sorts of wheeling and dealing going on – stalls set up selling the creatures needed for the sacrifices, and money changers, because only special Temple money could be used within the Temple’s precincts. It had become a racket, a money-making operation for the priests and their hangers on, and a barrier between poor folk and their God. No wonder Jesus was angry – some hesitate to use that word because for them anger is a sin – well, in some circumstances we have every right to be angry, and Jesus certainly had every right to be angry with the Temple traders – after all, if He’d gone up to them and said “do you think it might be a good idea if you took your beastly trade elsewhere?” do you think they would have taken any notice? Of course not.

What has Jesus, the living Temple, coming to the Temple in Jerusalem to say to us? He came to people who were secure in their beliefs, who’d got a good system going for their own benefit, and they didn’t want to know. Jesus comes to every generation of Christians, to challenge us whether we really are being faithful to Him who is the way, the truth and the life. not a way among many, a truth to take or leave, a life like any other.

What challenges is Jesus issuing today? The answer is in St John’s Gospel 21, where the risen Lord appears to His friends at the lakeside. He asks Peter who had already denied him, three times: do you love me, do you love me, do you really love me? He is saying that to us now. Peter was hurt and stung to reply “Of course I love you.” That is Peter, but what about us? When was the last time we denied Our Lord? Was it, as with Peter, days ago? You’re lucky if that’s the case, because the little betrayals are there all the time: the spiteful acts, the unloving look, the waspish tongue. Everything we do that denies our calling to be people of love betrays Our Lord again, and sends Him back to his Cross. The trouble is, we get so hardened to sin, the little sins of everyday life, as well as the big ones that we almost cease to notice what we are doing. Do you love me, do you really love me? You will also remember how Our Lord followed up his challenge to Peter, and Peter’s protestations: follow me, the same challenge He issues to us all: in other words, now, not tomorrow, next week, next year, is the time to start putting into practice what we profess. Sometimes, words are not enough.

Third Sunday of Easter Luke 24,36-48 Witnesses play a critical role in every Trial before a... END_OF_DOCUMENT_TOKEN_TO_BE_REPLACED

Divine Mercy Sunday John 20,19-31 Preaching in England about the joy of Christ’s resurrection was never... END_OF_DOCUMENT_TOKEN_TO_BE_REPLACED

The Psalmist in his prophecy about Easter Day (Ps 118:24) says: «This is the day the... END_OF_DOCUMENT_TOKEN_TO_BE_REPLACED

Fifth Sunday in Lent John 12,20-33 We have reached the days before Easter with its serious... END_OF_DOCUMENT_TOKEN_TO_BE_REPLACED

Fourth Sunday in Lent John 3,14-21 People, myself included, have wondered how St John, writing about... END_OF_DOCUMENT_TOKEN_TO_BE_REPLACED

Third Sunday in Lent John 2,13-25 “We don’t do things like that round here. You’ve only... END_OF_DOCUMENT_TOKEN_TO_BE_REPLACED

Second Sunday in Lent Mark 1,14-15 To the surprise of the BBC managers, a popular TV... END_OF_DOCUMENT_TOKEN_TO_BE_REPLACED