Blessed are the pure in heart

TAKE UP YOUR CROSS

Get behind me Satan. Why was Jesus so harsh with Peter? Jesus had just told his friends that he was to suffer and die, and rise again on the third day, and Peter had remonstrated with him. Maybe, like a lot of us, Peter only heard part of what had been said, the first bit – the suffering, not the triumph, maybe the whole thing was just too awful to contemplate, maybe Peter loved Jesus so much that he could not bear the thought of him suffering, maybe Peter was worried about the consequences for him if this happened to Jesus, and indeed, when it did happen, he did not acquit himself well. Or maybe, when Jesus called him Satan this was no figure of speech, but the plain, unvarnished truth. After all, Jesus knew all about Satan. Satan had come to Jesus in the wilderness as the tempter – amazingly, Mark almost dismisses this time of trial in two short verses, but Matthew and Luke spell out for us how Satan tried all manner of beguiling to bend Jesus to his will. Maybe Jesus, here, sees Peter doing Satan’s dirty work for him, by suggesting that all the pain of the cross is not necessary.

The cross was a favoured means for the Romans of executing criminals – the cross, not in some figurative sense, but in reality loomed over the lives of the early Christians. We know after all from the film of that title that the slave Spartacus led a revolt by his fellow slaves which was brutally crushed by the authorities and that all the perpetrators were crucified, mile after mile after mile of them, strung up along the Appian Way and left to suffer, to rot, and to die. 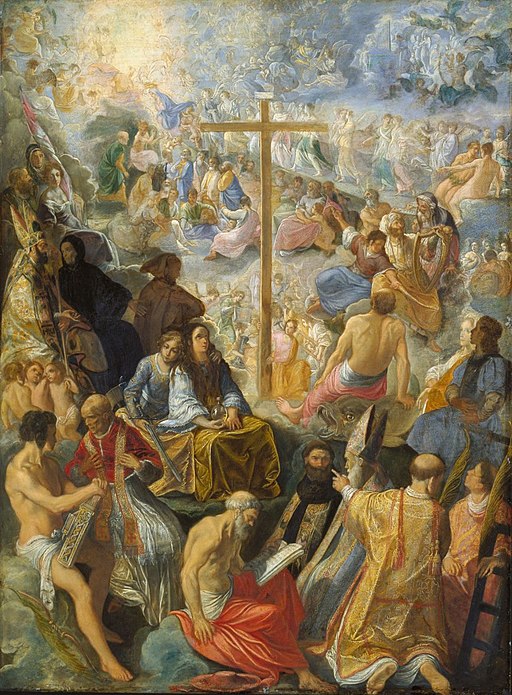 Adam Elsheimer: The Exaltation of the True Cross, Public domain, via Wikimedia Commons

Our cross is not likely to be, literally, a stringing up to die, but a cross still awaits us, nevertheless. And the clue to what this means lies in the following words of Jesus – those who want to save their life will lose it, and those who lose their life for my sake, and for the sake of the gospel, will save it. We are being asked whether we are ready to embrace a self-less life or whether we want to carry on leading a selfish life. Here we are talking about, in that good old evangelical word, conversion. We are being called to share in Christ’s mission to the world; we are being called to share in the life of Christ himself, to make his standards, his beliefs, his truth, our own. And that means that we may also have to say “Get behind me Satan” when the temptations come, the temptations to walk the way of the world rather than the way of the cross, the temptation, as a footballer might say, to take your eyes off the goal, all of which ultimately means a denial of Christ, a denial of his claim on our life which was staked at our baptism and acknowledged by our own lips when we were confirmed, a denial of his truth. And the words of Jesus are not even “accept a cross”, but rather “take a cross.” In other words, join in gladly in Christ’s life and suffering for the sake of the Gospel.

Crucifixion is unlikely to be our lot. Life is simply not like that. But there is still a danger for us, that our response to the challenge that Jesus issues will be lukewarm. It has been said that when the going gets tough, the tough get going. That is capable of more than one meaning. But the challenge remains: of course our ordinary living makes great demands on everyone. Many people have worries about money, health, family, the state of the world. The danger then becomes that we fail to hear again for ourselves what the Master is saying: and he is saying just this: that he knows, he understands, he has drunk deep of the cup of suffering himself, he has known betrayal, desolation, all the things that can so weigh us down, but the solution lies in embracing his way, in losing our present lives in the warm embrace of his own, of ceasing to hold out against him, but accepting his truth and following in his way, knowing that indeed such a light affliction will win so great a prize.

Fifth Sunday of Easter John 13;31-35 We have followed the events of the Passion, the Cross... END_OF_DOCUMENT_TOKEN_TO_BE_REPLACED

Fourth Sunday of Easter John 10;22-30 How often when we ask a question have we already... END_OF_DOCUMENT_TOKEN_TO_BE_REPLACED

Eastertide Luke 20;1-18 In my student days many seminarians were helped by the work of London’s... END_OF_DOCUMENT_TOKEN_TO_BE_REPLACED

Palm Sunday Luke 22;14-56 Let us reflect on Jesus speaking of himself as “the bread of... END_OF_DOCUMENT_TOKEN_TO_BE_REPLACED

Fifth Sunday of Lent John 12;1-8 Jesus travelled with twelve disciples, but also had a considerable... END_OF_DOCUMENT_TOKEN_TO_BE_REPLACED