The Church is Catholic

Discipline in the Church

The Foolishness of the Cross

Just as Simon Peter had made his great confession of faith and promise of loyalty to Jesus the Son of the living God, the narrow way opens up like a sink hole in front of him. On the way from Caesarea Philippi to Jerusalem, the Lord begins to prepare his friends for what they would see him undergo as the suffering servant of God that Isaiah had predicted. Peter reacted with the mindset of a typical Jew of his time and all the Messianic expectations that went with that. The way ahead for the disciples would still require a major transfiguring of their minds. The foolishness of the cross and passion that loomed before him would be an exceptional brand of life with a new concept of love and loyalty, of holiness through sacrifice rather than ritual religion. “To love your enemies and do good to those who hate you, bless those who curse you, and pray for those who persecute you”. [Luke 6; 27] To do all this with the certain knowledge that it would bring conflict and make enemies. Jesus would follow his own teaching to the letter, ultimately to the world’s lowest place, the cross. No wonder Simon Peter protests, and for a brief moment acts as a stumbling block and the easy agent of Satan. “You are thinking not as God does but as human beings do” says the Lord to him. 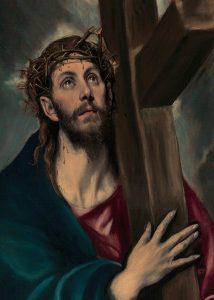 The new brand of life the Lord brings was not as C.S. Lewis said, “to make better people, mere improvements, but to change us into a new humanity”. Thirty years later Peter would get it! He wrote to his own converts “for this you were called, because Christ suffered for us as an example to follow in his steps”. [1 Peter 2; 21] The first step to this new humanity is the realisation that a change is needed. Truly that step is especially difficult for us today in our religion less pagan religious world. We inhabit a culture preoccupied with the goal of happiness. But Jesus never promised his followers happiness, rather he proclaims the giving up on self interest and the surrender of personal contentment. These are goals right outside contemporary culture, which is often described as “sanctified hedonism”.

Jesus was leading his followers down a difficult path and the same call is before us, to take up the way of the cross. This call has for a long time fallen on deaf ears and even in apostolic times was “foolishness.” Perhaps we may hope that eyes may soon be open to realise that the pursuit of happiness is frankly impossible, dehumanising and cannot last, and it so often leads to utter loneliness. “What profit is it to a man to gain the whole world and lose his own soul”. [Matt. 16; 26]

The way that Jesus was taking his disciples was to give up on the temporal in favour of the eternal. This is why in the divine plan, he became a man and revealed to the rest of humanity a divine purpose and meaning for life. He had to do this within the real world of good and evil, of sublime beauty yet appalling evil. The way through these two poles is so dark and treacherous; men will hesitate, the will need a bright vision to give light to their way. That is why, after leaving Caesarea Philippi, Simon Peter and the inner group immediately go on to experience the transfiguration and glory of Christ the Son of the living God as the next step.

2. Sunday after Trinity Luke 9;51-62 “Not Fit for Service” is an English phrase meaning, useless... END_OF_DOCUMENT_TOKEN_TO_BE_REPLACED

Trinity Sunday John 16;12-15 “The Forgotten Trinity” is a British Council of Churches report in 1989... END_OF_DOCUMENT_TOKEN_TO_BE_REPLACED

Pentecost Sunday John 20;19-23 The picture presented in the description of the first Pentecost in The... END_OF_DOCUMENT_TOKEN_TO_BE_REPLACED

Ascensiontide John 17;20-26 I dreamt last night that I was in heaven, and do you know,... END_OF_DOCUMENT_TOKEN_TO_BE_REPLACED

Sixth Sunday of Easter John 14;23-29 This Reflection is based on a book entitled Encountering Evil... END_OF_DOCUMENT_TOKEN_TO_BE_REPLACED

Fifth Sunday of Easter John 13;31-35 We have followed the events of the Passion, the Cross... END_OF_DOCUMENT_TOKEN_TO_BE_REPLACED

Fourth Sunday of Easter John 10;22-30 How often when we ask a question have we already... END_OF_DOCUMENT_TOKEN_TO_BE_REPLACED