“Thou didst not abhor the virgin’s womb.” [Te Deum]

And is it true?

Amen is an important word. It means, “Yes, God, I agree. I’ll do what you are asking me to do.”

Jesus is the ‘God-Incarnate, Man-Divine’, The bible calls Him “The Amen” – He is God the Father’s Great ‘Yes’ to the World He created – though those who’ve never met Him, imagine that He’s Someone Who’s eternally saying, ‘No!’, or ‘Don’t!’ or ‘you mustn’t’ to anything they want to do.

It was the moment that God took human flesh, and put His ultimate ‘stamp-of-approval’ on His Creation – by becoming part of it, and thus saving it from self-destruction, as He revealed Himself as its Maker, Reconciler, and One Who loves what He has created – despite Man’s imperfections.

To make this happen, God invited Mary to be His fellow-agent. So at an instant of time He let His Plan revolve upon the answer one teenager gave to His invitation: “Amen! Yes certainly!”. 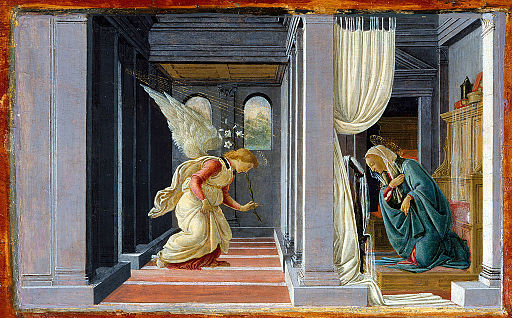 Now let’s try to imagine what Mary’s “Amen/Yes” to God, meant for her. Her first feeling (like ours) might have been of excitement at being ‘chosen’ by God – but as we know well – the excitement at being chosen is followed (or even swallowed!) by an inflow of misgivings.

Mary’s misgivings could have been: “What will my parents, and my fiancé Joseph, think? What will my Rabbi at Synagogue say when he learns I’m pregnant? Won’t they all assume the worst? And how do I explain to others what the Angel meant who said I would ‘conceive by the Holy Spirit’ – when I myself don’t understand what he meant? Some will think I’ve gone mad; and the gossip and speculation in Nazareth about my pregnancy will quickly become ‘The-Talk-of-the-Town’.

But God Himself knew what He was doing – even if, at first, nobody else did. When God devises any Plan that involves humans working alongside Him, He doesn’t reveal His entire Plan to them from the start. For one thing, our minds can’t ‘take in’ everything, all at once, and we’d end up getting into a terrible muddle. But another reason is that the most critical part of any Plan needs to remain secret until the right moment arrives to reveal them fully to its chosen participants.

Mary was chosen by God to play the hardest role: by bearing God’s Son, and by having to endure all those misunderstandings we thought about a moment ago. But God, as He so often does, invited others to become Mary’s ‘Supporting Cast’ – including most of those she thought, would be scandalized.

This included, her husband Joseph, her parents Joachim and Ann, her cousin Elizabeth and Zacharias, John the Baptist; and John the Apostle who eventually ‘took her into his own home’, at Ephesus’.

Like Mary, most of them ‘hadn’t a clue’ what they were letting themselves in for; but each of them, like Mary, said “Amen” to God – and played their part in God’s Plan for the salvation of His world.

It’s also our answer of “Amen, Yes!” that God is awaiting. Our answer to whatever role (small or large) He’s inviting us to play in His Master-Plan – and He’s awaiting that answer from us today.