The Key is “Divine Mercy”

Preaching in England about the joy of Christ’s resurrection was never easy. It was made difficult because some in the pews really believed in reincarnation or had home spun ideas that bore resemblance to TV’s Startrek. Readers of Sunday newspapers would be aware that some bishops were saying that the resurrection was symbolism and myth.

The New Testament writers make their position perfectly plain that the triumph of Jesus after his terrible death was not a magical illusion, not an hallucination or a cobbled together myth, but a reality that had been witnessed and touched by ordinary folk. The eyewitnesses themselves had all the normal human reactions, they were surprised, frightened without knowing what to do next, but in great numbers they were prepared to stand up and be counted as true believers in these events which became the foundation of a new age of religious life. From the birth of Jesus to his resurrection, these men and women had seen the key to “Divine Mercy,” great gifts signifying the loving kindness of God. Pope St John Paul II had taken these words “Divine Mercy” from St Augustine’s Easter sermon, giving a name for this special Sunday, “think of God’s great mercy! We may give bread and charity to the hungry, but God gives us unworthy servants the gift of his salvation.” [Augustine Sermon 116]

The gift of the resurrection is the key to the culture of death, that tragic human curse, and now the tools are given to deal with it. 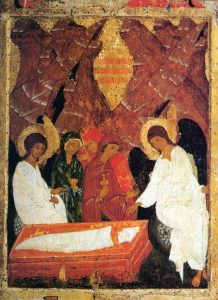 This is theme spelled out by St John in this gospel written after years of reflection. Christ’s victory was like the Jewish Passover, a turning point that gave birth to the Apostolic Church. St John tells us about the first meeting on a Sunday between the Risen Lord and the frightened Apostles in a room behind doors. It was a crucial meeting for the Church that St Paul also knew and passed on to the Corinthians. “Jesus rose again the third day according to the Scriptures, He was seen by Cephas, then by the twelve. After that He was seen by over five hundred brethren at once.” [1 Corinthians 15,5]. The meeting had key elements that were similar to other appearances such as the Emmaus group for it all took place on the first day of the week, at a meal; Jesus gave the group his peace, showed them his wounds and gave them his authority. St Matthew had noted that many were doubters, but St John adds to the narrative the response of St Thomas who was not so much a cynical doubter (perhaps like those today who doubt the covid vaccines) but one who was still open to belief and wanted that physical contact with the wounded body of his Lord by which he would go on throughout his life to affirm Christ’s divinity. Without the cross there could be no resurrection. Meaning there some doubts that are a good prelude to deep faith. The whole episode underpins apostolic witness to the real death and the real wounds that precede the peace that overcomes fear and doubt. Finally the apostles are given divine authority to develop the gifts of sacramental communion and reconciliation to nourish their converts, even those like St Thomas.

The meeting between Jesus and his followers is in a sense a commentary and key to the remarkable claim made in the first letter of John the Elder. “That which was from the beginning, which we have heard, which we have seen with our eyes, which we have looked upon, and our hands have handled, concerning the Word of life, the life was manifested, and we have seen, and bear witness, and declare to you that eternal life which was with the Father and was manifested to us…..that you also may have fellowship with us; and truly our fellowship is with the Father and with His Son Jesus Christ”. [1 John 1-3]