The Kingdom of Caesar

The season of Pentecost is a time to reflect on word’s of Jesus for today, to gain a greater self understanding of “being church”. Jesus tells his friends that a “prophet is without honour” even among his countrymen and relatives. This remark comes after his teaching around Galilee and after performing numerous healings, including taking his inner group of disciples into the home of a leading member of the synagogue to restore the daughter to life. The crowds were amazed yet at the same time some were outraged. The outrage would grow and grow over the course of time urged on by religious enemies.

This saying that “a prophet is without honour” was no doubt well known at the time, for outrage had been the reaction to many of the great Hebrew Prophets including John the Baptist. All had suffered at the hands of secular and religious leaders. This was important for the twelve disciples to know as they are about to undertake their first training mission. [Mark 6,7 ff] 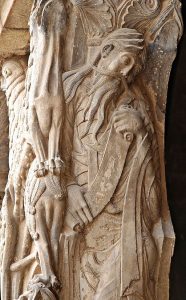 The Lord saw himself as fulfilling the prophet’s mission because they were all inspired by the Holy Spirit to speak the “Word of God”. The great Prophets were not primarily foretelling the future or interpreting dreams and signs. Those who predicted in that way were “the Seers” and were often called upon to do so in the Old Testament by people of power. The great prophets were highly tuned to the ways of God inspired by the Holy Spirit to speak the truth, whatever the consequences, entirely from the perspective of God rather than the political and social entitlements of mankind. They were totally committed, whatever the price, to obey and speak out. This kind of prophet has always caused outrage and fierce opposition from those in authority who like Caesar had the power to arrest, imprison and put to death. This continues to this day, so that the Lord’s remarks “the prophet is without honour” are highly important for us who witness right now!

There are still prophets today throughout the world ready to speak in truth about “the dangers of spiritual blindness” and the inherently ungodly and egocentric Kingdom of Caesar that is even destroying Christianity from within. This has been going on for some time even before Karl Marx when another German philosopher Ludwig Feuerbach in 1835 wrote “politics is now our religion”. This was part of an enlightenment that has been advancing the idea that life can be lived without reference to a God given creation. A philosophy centered on the self and individual happiness. George Orwell saw the coming of this Gnostic obsession with economics alone which he correctly said, would create the death of objective truth.

Today aggressively hateful rejection of Christ is everywhere and western countries are no exception. In the USA we read of Catholic priests being told by frightened Bishops to resign their parishes for upholding tradition. Recently, London’s famous Speaker’s Corner in Hyde Park, the home of public free speech, no longer protects Christian speakers who are arrested by the police for being offensive rather than the abusive mob of violent and threatening hooligans. A teacher and a church school chaplain have been fired for preaching tolerance and freedom of speech. Schools are becoming a battleground reports Christian Concern. These events are now commonplace in a society of anti Christian ideologies who are intent on silencing Christ’s teaching of the kingdom of God. All Christians are now called to be prophets without honour, proclaiming that the true infrastructure of life is the relationship between humanity and the living God. He who reminds us of the response to God’s prophets also says, “Blessed are you when they revile and persecute you, and say all kinds of evil against you falsely for my sake; rejoice and be exceedingly glad, for great is your reward in heaven”.

Fifth Sunday of Easter John 13;31-35 We have followed the events of the Passion, the Cross... END_OF_DOCUMENT_TOKEN_TO_BE_REPLACED

Fourth Sunday of Easter John 10;22-30 How often when we ask a question have we already... END_OF_DOCUMENT_TOKEN_TO_BE_REPLACED

Eastertide Luke 20;1-18 In my student days many seminarians were helped by the work of London’s... END_OF_DOCUMENT_TOKEN_TO_BE_REPLACED

Palm Sunday Luke 22;14-56 Let us reflect on Jesus speaking of himself as “the bread of... END_OF_DOCUMENT_TOKEN_TO_BE_REPLACED

Fifth Sunday of Lent John 12;1-8 Jesus travelled with twelve disciples, but also had a considerable... END_OF_DOCUMENT_TOKEN_TO_BE_REPLACED