What Does God Think Of Money?

The Parable of the Unjust Steward

The 14th Sunday of Trinity

Many seminarians will remember the parable of the Unjust Steward, so often described in commentaries as difficult to explain with its ironical tone. Even the steward’s descriptions vary from text to text. Sometimes called, unjust, dishonest or even a shrewd bailiff. It is certainly not like most of St. Luke’s other dramatic parables, such as the Good Samaritan or the Rich man and Lazarus that follows. Revisers of the 1928 American Book of Common Prayer even replaced this sneaky and unlikable steward reading for the 9th Sunday after Trinity with the more likeable Prodigal Son!

The best solution is to see this as part of a longer section on discipleship that in the ever changing daily life of the real world has to function at various levels, and especially in regard to wealth and possessions. Most of us know that fixed rules do not necessarily make it easier to think out our decisions or behave responsibly when dealing with the poor, supporting the sick or giving to charity and making investments. We are balancing our judgements against many twists and turns.

Last month we had a reading about a greedy farmer who went beyond being responsible for his resources becoming a hoarder consumed by wealth yet a pauper before God. Responsible wealth must be accompanied by godly wisdom. [Luke 12;13–21]. In the case of the steward it is the exact opposite. Although at first accused of being wasteful [verse 1] and seeing an opportunity to save his situation, in a shrewd move reduces or cancels debts owed to him. Disciples too must make practical judgements before they act. 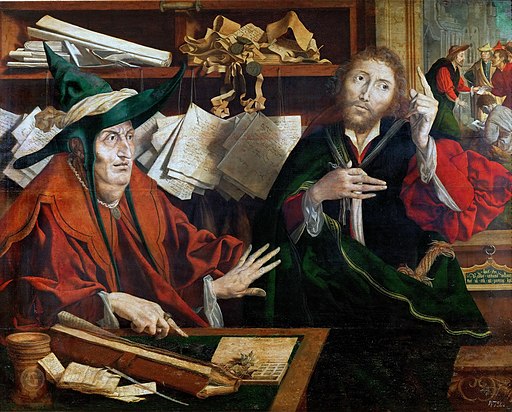 It seems that at the time of Jesus, that wealth was looked upon as having been acquired by corruption, an attitude that is alive and well today in a world where wealth is flouted in a background of hardship and shortages. The British press have recently exposed the colossal quantities of food wasted in the Houses of Parliament by the elite while food banks cannot meet the needs of the hungry. Thus Jesus had a ready audience too for the steward, a true son of this world, who pulled himself together by organising a win/win situation for his master for himself and for his debtors. Disciples as “the sons of light” must be “innocent as dove yet wise as serpents” yet they must be clear that in the end they cannot have two masters “You cannot serve God and mammon.” [verse 13] There is nothing wrong with being responsible about our resources, but these can quickly become harmful unless accompanied by godly wisdom.“

St John Chrysostom reflected on this passage saying “remember that you are a steward and have possessions for only a brief passing use, where your heart is there is your treasure also.”
The wisdom of the parable becomes much clearer when set against the behaviour of the rich man and Lazarus that will follow in next week’s reflection on Luke 16;19ff.

The Feast of the Baptism of the Lord John 1;29-34 Psalm 42 speaks of a soul... END_OF_DOCUMENT_TOKEN_TO_BE_REPLACED

Solemnity of the Epiphany of the Lord John 1;1-14 Epiphany is one liturgical drama. It begins... END_OF_DOCUMENT_TOKEN_TO_BE_REPLACED

The Holy name of Jesus Luke 2;15-21 One of the great moments for a parent is... END_OF_DOCUMENT_TOKEN_TO_BE_REPLACED

Solemnity of the Nativity of the Lord John 1;1-14 Writing a homily for Christmas is made... END_OF_DOCUMENT_TOKEN_TO_BE_REPLACED

The Fourth Sunday of Advent Matt 1;18-25 I had a shock during the week. No, it... END_OF_DOCUMENT_TOKEN_TO_BE_REPLACED

The Third Sunday of Advent Matt 11;2-11 Two figures prepare us for the coming of Jesus... END_OF_DOCUMENT_TOKEN_TO_BE_REPLACED

The Second Sunday of Advent Matt 3;1-12 “Prepare the way for the Lord” cried John the... END_OF_DOCUMENT_TOKEN_TO_BE_REPLACED

Advent Sunday Matt 24;37-44 The writer Rod Dreher begins his book The Benedict Option with these... END_OF_DOCUMENT_TOKEN_TO_BE_REPLACED

Sunday before Advent, Christ the King Luke 23;33-43 In six months, Britain will witness the coronation... END_OF_DOCUMENT_TOKEN_TO_BE_REPLACED

2nd Sunday before Advent Remembrance Sunday Luke 21;5-19 One of the saddest things about growing old... END_OF_DOCUMENT_TOKEN_TO_BE_REPLACED

3rd. Sunday before Advent Luke 20;27-38 The Reflections using Luke’s gospel will end with the final... END_OF_DOCUMENT_TOKEN_TO_BE_REPLACED

All Saints Tide Would you like to be a saint? The whole idea of sainthood arouses... END_OF_DOCUMENT_TOKEN_TO_BE_REPLACED

The 18th Sunday of Trinity Luke 18;1-8 Jesus told the disciples a parable about the need... END_OF_DOCUMENT_TOKEN_TO_BE_REPLACED

The 17th Sunday of Trinity Luke 17;11-19 Christians should think regularly about the word “mercy”. It... END_OF_DOCUMENT_TOKEN_TO_BE_REPLACED