The Need To Repent

The Friends of Jesus

Jesus, like other great teachers teaching about spiritual truths, uses parables or analogies based on earthly, every-day ideas – like fishing, building, bread, water and wind to describe heavenly things – about which we know so little, and understand even less.

Today’s Parable, as St Luke tells it, is about relationships: between God and man, and man and his fellow-men, and this is a story, told by Jesus, about a father and his two sons. One son was very conscientious and hard-working, who always did what his father told him; the other Son was what we call in English ‘a Tear-away’ – someone who wants to “live his life to the full”. There’s no suggestion that the father preferred one to the other. They just were different.

One day, the younger son asked his father to pay him his share of the estate, in one lump sum. That was a reasonable request, which many fathers accept today, in order to set up their children in business; or to train them for a career from which they and their family will eventually also benefit.

The Father, being aware of his younger son’s impulsiveness, doubtless realised that it involved a risk. For example, if a tear- away didn’t complete his training, failed his final exams, or his business went bust. But impulsiveness is also often what leads people to success rather than failure; and the father may often have wished his elder son would take a few more risks – instead of staying at home and valuing security above enterprise.

But the tear-away’s plans all went ‘pear-shaped’. A great famine played havoc with everyone’s finances, and he was forced to work for a pig-farmer at a pittance!

But this parable then took a remarkable, but very credible turn. Our tear-away realised that he’d been foolish, and regretted it; but his thinking remained self-centred. He guessed that his Father would take him back home, even if only as a servant. He would have to apologise, of course for wasting his money.

But his real interest was still his own welfare. Even if he were only taken back to be a servant, he would be far better off than in his present pigsty, where nobody fed him. So he went back home, with his apology “at the ready”. 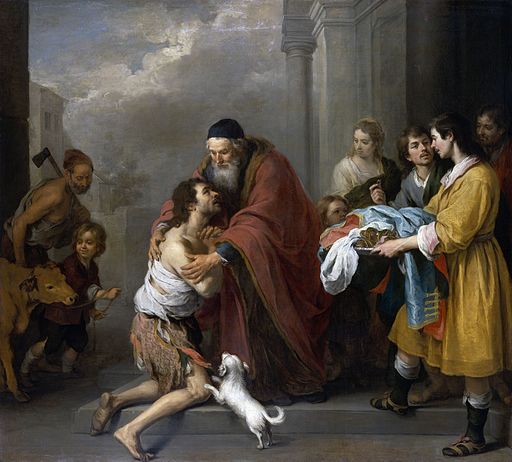 But as we know, what happened in fact exceeded anything he had a right to expect. His loving Father, instead of chiding him for wasting his money, embraced him, overjoyed at getting him back, and restored him to full sonship on the spot; and arranged for him to be clothed and a celebratory party to be held, to mark the occasion of his return and full reconciliation with the family.

Nobody was more surprised than young tear-away himself, who had been anticipating, at best, a life of servitude. The household too were all delighted. As St. Luke says, “they danced, and sang for joy and made merry”.

But not everyone! His older brother, who had never put a foot wrong, was disgusted at their father’s decision to throw a dance, that he refused to participate. He began to feel resentful and hard done-by. It just isn’t fair, he complained, and refused his Father’s entreaty to join in the celebrations.

But God has different ideas about fairness from those people of today have been taught to believe in. And the question each of us should ask himself this Lent is: “Which character do I resemble most?”

Is it our-tear away, or his brother, or his loving father, who ran to greet his lost Son, embraced him, and restored him to his own Family?

Fifth Sunday of Easter John 13;31-35 We have followed the events of the Passion, the Cross... END_OF_DOCUMENT_TOKEN_TO_BE_REPLACED

Fourth Sunday of Easter John 10;22-30 How often when we ask a question have we already... END_OF_DOCUMENT_TOKEN_TO_BE_REPLACED

Eastertide Luke 20;1-18 In my student days many seminarians were helped by the work of London’s... END_OF_DOCUMENT_TOKEN_TO_BE_REPLACED

Palm Sunday Luke 22;14-56 Let us reflect on Jesus speaking of himself as “the bread of... END_OF_DOCUMENT_TOKEN_TO_BE_REPLACED

Fifth Sunday of Lent John 12;1-8 Jesus travelled with twelve disciples, but also had a considerable... END_OF_DOCUMENT_TOKEN_TO_BE_REPLACED