The parable of the two sons in today’s Gospel reading was addressed to the chief priests and elders of the people. Its purpose is to defend Jesus’ invitation to sinners and outcasts to the Kingdom, in the face of the sneers of the religious establishment.  Of course, the parable outraged the religious leaders. The first son represents sinners. Like him, they originally chose to go their own way but repented and followed Gods way and so gained entry into the Kingdom. The second son represents the chief priests and elders.  Like him, they promised to work for God but failed to do so and so excluded themselves from the Kingdom. The parable echoes a favourite theme of Matthew, the split in the religious person between ‘saying’ and ‘doing’. Hence it is relevant for ‘religious’ people of every age. 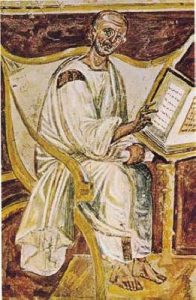 Many of the greatest saints in history were sinners who originally said ‘no’ to God and who later had a change of heart and said ‘yes’. St. Augustine is one of the best examples and there are many others.

I am reminded of the story of an Afro-American who was standing outside an evangelical church in one of the southern states in the US. It was many years ago and the Church was for whites only. Just then, Jesus came along and asked the man what he was doing there. The man told him that he loved listening to the singing and that was why he was standing outside the door listening. He went on to explain that because of his colour, he could not enter the Church. Jesus smiled and said, ‘I know how you feel. I myself have been trying to get into that church since it was opened’. In other words they needed a change of heart.

In reflecting on the two sons in today’s Gospel story, it is worth asking, how I see myself in relation to each of them. To be honest, I may find a little bit of each in me, and that is not necessarily bad. However, the aim and the ideal is that I continue to renew my commitment to Jesus, and I continue to open my heart to the fullness of his message.

Third Sunday after Epiphany Luke 4,14-21 Jesus returns to Nazareth, his home town, as was his... END_OF_DOCUMENT_TOKEN_TO_BE_REPLACED

Second Sunday after Epiphany John 2,1-11 Signs and signposts are essential for finding our way about.... END_OF_DOCUMENT_TOKEN_TO_BE_REPLACED

The Epiphany of the Lord Matt 2,1–12 Is it true, this fantastic story of wise men... END_OF_DOCUMENT_TOKEN_TO_BE_REPLACED

The Nativity of the Lord Luke 2,15–20 Early in September the British public were hearing that... END_OF_DOCUMENT_TOKEN_TO_BE_REPLACED

Fourth Sunday of Advent Luke 1,39–45 This reflection entitled “Mary’s Troubles” was inspired by an Advent... END_OF_DOCUMENT_TOKEN_TO_BE_REPLACED

Third Sunday of Advent Luke 3,7-18 The stark message of John the Baptist is “Repentance for... END_OF_DOCUMENT_TOKEN_TO_BE_REPLACED

Second Sunday of Advent Luke 3;1-6 Imagine that you’ve just had a message from God. He... END_OF_DOCUMENT_TOKEN_TO_BE_REPLACED