The Voice in the Wilderness

“Thou didst not abhor the virgin’s womb.” [Te Deum] 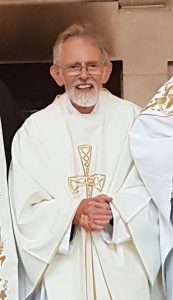 The late Father Peter Moss was one of the first English priests received into the Nordic Catholic Church by Bishop Flemestad and in the presence of Prime Bishop Mikovsky in 2016. Father Peter was crucial to our beginnings as a small group. So tragically Father Peter developed a brain tumour and died early in the following year. His scholarship and gentle wisdom, his courage to leave the Church of his baptism as well as in the final days, facing the illness that took his life, were an inspiration. We are grateful to Peter’s beloved wife Comfort, who has given us the honour of putting some of his sermons into print as a tribute to a founding father and friend.

[Father Peter had a deep devotion to the Mother of God and her crucial role with other Old Testament figures in the divine plan of God and the “co-nature of Jesus Christ, son of God and son of man. Preparing now for the coming of our Lord’s own nativity, Father Peter explores a poem by R. S. Thomas a Welsh priest born 1913 entitled, The Coming, in which we see the Son of God from the beginning volunteer for the mission to mankind. The poem speaks of the world in brokenness and darkness which centres on a tree. Jesus knew that embracing the crib meant also embracing the cross and still choose to say in the final words, “let me go there”. The incarnation of Jesus Christ is an event that comes with a cost. Editor]

And God held in his hand a small globe.
Look he said. The son looked. Far off,
as through water, he saw a scorched land of fierce colour.
The light burned there; crusted buildings cast their shadows:
A bright Serpent, a river uncoiled itself, radiant with slime.
On a bare hill a bare tree saddened the sky.
Many People held out their thin arms to it, as though waiting for a vanished
April to return to its crossed boughs.
The Son watched them. Let me go there, he said.

These are words of God the Son to God the Father bringing out a new dimension of what is happening – “Let me go there”.

For example, take the last word, “there,” referring to Earth, the barren planet in the far distance, scorched by the sun, across which snakes ?? what seems to be a river of green slime. It is of course a metaphor of what humanity has made of the earth, created by God the Father, to be our home. It is an image of humanity in the world, turning from God and making it a place that is alien to the divine nature of the Father and the Son and his purpose for us his human children. 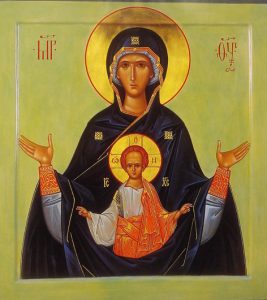 But there is nothing abhorrent to God the Son, in his mother the Blessed Virgin Mary, “thou didst not abhor the virgin’s womb”. For this young Palestinian woman was “full of grace” and her human nature was open to God’s love. She looked in perfect hope and trust for the consolation of Israel according to God’s promise to Abraham and the Patriarchs. All of which he had affirmed again and again through the Hebrew prophets. It is the sinlessness of Mary the Mother of God, born in the course of nature to Joachim and Anna drawn forth in the young woman’s life mysteriously – in a way that we can never fully grasp – but it is the grace of God her creator that undergirded God’s choice of her as the “vessel of the Spirit, ark of the covenant and gate of heaven”.

It is Mary’s purity, made in heaven and the temple of divinity that inspired her to offer herself in response to the message of the angel Gabriel. “Let it be according to thy word”. The mission of God’s Son to the world depends upon the cooperation of this unique woman. It is this, her sinlessness and complete openness and God centeredness, on which the great Churches of both East and West agree that we celebrate the feast of the conception of the Mother of God according to the Father’s will.