Why Was Jesus Baptised?

Baptism of the Lord

What are we to make of the strange matter of Jesus’ baptism? Baptism has many meanings, but it is undoubtedly for us about the forgiveness of sins: At some stage of church history, people postponed getting themselves baptised until they were on their death beds, because they reasoned that if they expired immediately after the water had been poured, they died sinless, and therefore went straight to heaven.

But where does Jesus fit into this? The Church has always believed that Jesus in his human incarnation was totally free from sin, so how can he, who was “God-in-man” be baptized for sin? This is Impossible. Two reasons may explain the Baptism of the Lord. First, it was an act of obedience: it was the will of his heavenly Father that he should do this; and how could he call others to loving obedience, if he was not prepared to set an example? And the second reason – solidarity. Solidarity with his human brothers and sisters who needed cleansing from their sins, in a way that he did not. Jesus in his baptism expresses his oneness, his solidarity with all of God’s children, who without exception stand in need of God’s forgiveness. 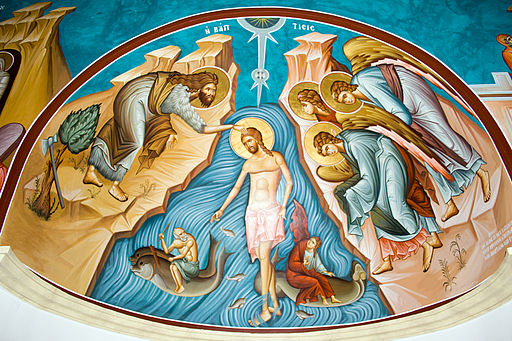 Mural from the John the Baptist Church at the Jordan River
[David Bjorgen CC BY-SA 2.5, via Wikimedia Commons]

To accept Jesus’ solidarity with us however also challenges us. How do our lives match up to the sinless Son of God? If we hold up a mirror to our lives, what do we see when look into it? The same old face that we have grown half to love, half to hate over the years? Or do we see rather someone who is being changed more and more into the likeness of Christ?

In Jesus we see one who is perfectly good, perfectly holy, perfectly loving. He has no ambition in his life save that of doing his Father’s will, of drawing all men to the fire of the love of God, of reconciling man to God and man to man. The world, of course, has other ambitions: the ambition for money, the ambition for power, the ambition to destroy, the ambition to bring evil down upon others. If Jesus had been prepared to keep quiet, to be a silent eccentric, then he could probably have lived out his life in the carpenter’s shop, but as the modern hymn puts it, he had a Gospel to proclaim, and it was inevitable therefore that his other-worldly ambition would come into head on conflict with the ambition of this world. So the result was that they put this dangerous dreamer to death, and thought that they had silenced him for good.

We know that isn’t how it turned out. We know that Jesus’ resurrection proves that love is stronger than death; we know that that puts the ultimate question mark against the world’s way of doing things. Does not the resurrection prove conclusively that the only ambition worth having is the one that Jesus had, of doing the will of God the Father, come what may? Jesus’ ambition is God-focused and leads to new life; the world’s ambition is self-focused and leads to death. Equally our baptism calls us to share to the full in all that Jesus is: his love, his obedience, his other-worldly ambition, or as the word would put it, his hopeless eccentricities.

At the Jordan river all the people were baptised and Jesus was there in the middle of them. Isn’t this how the Church should be? We should be a people of joy, acknowledging the presence of the Lord in our midst. With that confidence, we should then, like Jesus be ready to be ambitious for God out there, taking his message to the world, a private affair no longer. And if we are regarded as fools, then what better than to be fools with Christ, fools for Christ? Don’t worry: with God on our side, who can be against us?

2. Sunday after Trinity Luke 9;51-62 “Not Fit for Service” is an English phrase meaning, useless... END_OF_DOCUMENT_TOKEN_TO_BE_REPLACED

Trinity Sunday John 16;12-15 “The Forgotten Trinity” is a British Council of Churches report in 1989... END_OF_DOCUMENT_TOKEN_TO_BE_REPLACED

Pentecost Sunday John 20;19-23 The picture presented in the description of the first Pentecost in The... END_OF_DOCUMENT_TOKEN_TO_BE_REPLACED

Ascensiontide John 17;20-26 I dreamt last night that I was in heaven, and do you know,... END_OF_DOCUMENT_TOKEN_TO_BE_REPLACED

Sixth Sunday of Easter John 14;23-29 This Reflection is based on a book entitled Encountering Evil... END_OF_DOCUMENT_TOKEN_TO_BE_REPLACED

Fifth Sunday of Easter John 13;31-35 We have followed the events of the Passion, the Cross... END_OF_DOCUMENT_TOKEN_TO_BE_REPLACED

Fourth Sunday of Easter John 10;22-30 How often when we ask a question have we already... END_OF_DOCUMENT_TOKEN_TO_BE_REPLACED