The Church is Catholic

You are Peter, the Rock

There have been many strains during the covid19 lockdown but some people have enjoyed the peace and quiet, the blue skies, songbirds and nature. Like the moon astronauts some see the earth in a new way. We need these precious times of retreat to see life from another and perhaps sharper angle, and have a chance with eyes and ears open to see our world and ourselves in a new light.

In the Gospel for this week, Jesus and his disciples are in Banias, in the far north of the Holy Land. In the days of Jesus this mountain city was called Caesarea Philippi; it was a place of retreat with sparkling springs and waterfalls, lush vegetation and exotic views especially of the snow clad Mount Hermon further north. In every way it was starkly different from the descent the disciples were about to make to the Jordan valley and the noise, heat and politics of Jerusalem and the city where Jesus would soon take his followers to face his persecutors and the final days of his trial.

Caesarea Philippi must have been a specially selected setting in which the eyes of his disciples were opening to see the true nature of their Rabbi and companion as “Christos, son of the living God”. If this retreat had not happened, they would have struggled to deal with the future battles. So it was the spokesman, Simon Bar Jonah whose confession was to become the turning point. “Who do people say I am?” was the question the Lord asks. “You are the Christos, son of the living God” was Simon Peter’s reply. This is truly the decisive moment, because Simon goes beyond the Jewish religious or political concept of Messiah in which he had been raised into the unique filial communion at the heart of the relationship between God the Father and God the Son, and at the heart of their own relationship with Jesus the Christ. 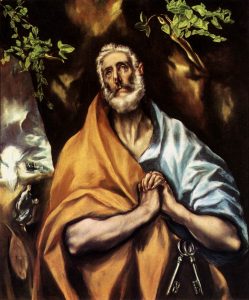 The words of Simon are for the evangelist Matthew, the foundation upon which the Church will be built, and Jesus recognises this, renaming Simon as PETROS (the rock). Simon Peter has put into words the rock (PETRA) upon which the Catholic Faith of the future Church will be anchored and in so doing he has opened the way to the Kingdom of Christ. This confession is the key and Simon Peter is the first to hold the key to being the new people of God.

Today, only those of us who can truly make the same confession that Jesus is the Christ and son of the living God are thus the “successors of Simon Peter” as some of the early Fathers of the Church wrote. The Church is forever called to be like a solid rock built upon these words and no others.

From this moment before leaving Caesarea Philippi, Jesus is preparing his followers for the difficult and narrow way of self sacrifice, persecution and suffering. As today’s followers of Christ this is the journey we too will be required to embrace more and more.

Third Sunday after Epiphany Luke 4,14-21 Jesus returns to Nazareth, his home town, as was his... END_OF_DOCUMENT_TOKEN_TO_BE_REPLACED

Second Sunday after Epiphany John 2,1-11 Signs and signposts are essential for finding our way about.... END_OF_DOCUMENT_TOKEN_TO_BE_REPLACED

The Epiphany of the Lord Matt 2,1–12 Is it true, this fantastic story of wise men... END_OF_DOCUMENT_TOKEN_TO_BE_REPLACED

The Nativity of the Lord Luke 2,15–20 Early in September the British public were hearing that... END_OF_DOCUMENT_TOKEN_TO_BE_REPLACED

Fourth Sunday of Advent Luke 1,39–45 This reflection entitled “Mary’s Troubles” was inspired by an Advent... END_OF_DOCUMENT_TOKEN_TO_BE_REPLACED

Third Sunday of Advent Luke 3,7-18 The stark message of John the Baptist is “Repentance for... END_OF_DOCUMENT_TOKEN_TO_BE_REPLACED

Second Sunday of Advent Luke 3;1-6 Imagine that you’ve just had a message from God. He... END_OF_DOCUMENT_TOKEN_TO_BE_REPLACED