The Key is “Divine Mercy”

And there shall be one fold and one shepherd

Witnesses play a critical role in every Trial before a Court of Law; but today, it’s difficult to persuade people to be witnesses.

People who have witnessed an accident or a crime often find it hard to remember all the details; moreover, giving evidence in public may be very challenging, especially if a witness is subject to cross-examination by professional lawyers – whose job is to portray the accused in the best possible light; worse still, supporters of the accused may intimidate witnesses – even before the trial starts.

The Trial of Jesus was a ‘put-up job’, from start to finish. Everyone involved in this shocking miscarriage of justice, like Caiaphas, the Sanhedrin, Pontius Pilate and others, had good reason to conceal their respective wrongdoings – which meant silencing every witness to His Resurrection (whether by lies, bribes, threats; or death!).

So, however joyful His disciples were at Jesus’ Resurrection, many of them would have realized, on further thought, that our Lord’s commission to them to be His witnesses would amount to signing their own Death-Warrant – as many of them discovered over the next few years! 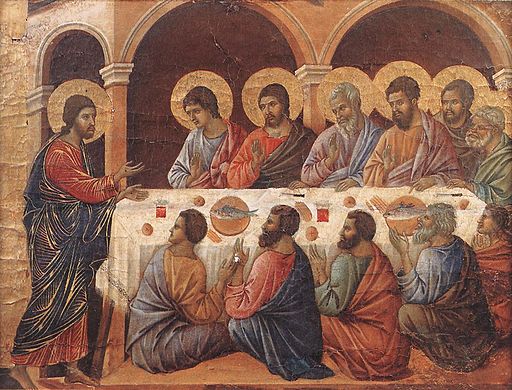 Duccio di Buoninsegna, Appearance While the Apostles are at Table (Public domain, via Wikimedia Commons)

Yes, we are right to rejoice with them that “The Lord is indeed risen”; but we surely do them an injustice if we underestimate their fear of the probable consequences that publicly witnessing to it would have – both for themselves and their families.

Most of us have lived among people who believe, as we do, that the Truth must first be learnt from parents, teachers and others and then borne witness to in our daily lives. But today the whole concept of Truth is threatened – and our freedom to witness to the Truth can no longer be taken for granted.

How has this come about? Well, ‘Truth is the first casualty of war’, and God is waging an ongoing War against the powers of Evil and Darkness – as did those first Christians (and we ourselves today!). In one respect they had a simpler, but not easier task than we have. Many of them believed that the Second Coming of Christ to Earth (the Parousia) would happen very soon – probably during their own life-time. Of course you and I can’t be sure that the Parousia won’t happen in our lifetime; but predicting the future leads mankind away from the Truth, as often as towards it.

But Persecution isn’t the only, or the greatest threat to our witnessing to the Truth today: rather it’s the popular propaganda which leads people to believe in doing whatever their feelings suggest to them, regardless of whether it be true or false. Such belief makes them feel safe, important, and intellectually and morally superior to anyone who doesn’t profess to share such feelings.

As a result, human learning, reason and common-sense – which have been so carefully and painfully built-up over the past 4,000 years – are being systematically eroded by it. It’s not easy to see which way we should turn to protect the Truth; but our present semi-blindness doesn’t mean that in God’s Mind there isn’t a Plan for us to follow in the Way He wants to lead us.

Following God’s lead often involves suffering. If God Incarnate suffered His Passion to ‘reconcile the World to Himself’, why suppose that being His Witnesses will be a pain-free experience for us?

Third Sunday after Epiphany Luke 4,14-21 Jesus returns to Nazareth, his home town, as was his... END_OF_DOCUMENT_TOKEN_TO_BE_REPLACED

Second Sunday after Epiphany John 2,1-11 Signs and signposts are essential for finding our way about.... END_OF_DOCUMENT_TOKEN_TO_BE_REPLACED

The Epiphany of the Lord Matt 2,1–12 Is it true, this fantastic story of wise men... END_OF_DOCUMENT_TOKEN_TO_BE_REPLACED

The Nativity of the Lord Luke 2,15–20 Early in September the British public were hearing that... END_OF_DOCUMENT_TOKEN_TO_BE_REPLACED

Fourth Sunday of Advent Luke 1,39–45 This reflection entitled “Mary’s Troubles” was inspired by an Advent... END_OF_DOCUMENT_TOKEN_TO_BE_REPLACED

Third Sunday of Advent Luke 3,7-18 The stark message of John the Baptist is “Repentance for... END_OF_DOCUMENT_TOKEN_TO_BE_REPLACED

Second Sunday of Advent Luke 3;1-6 Imagine that you’ve just had a message from God. He... END_OF_DOCUMENT_TOKEN_TO_BE_REPLACED